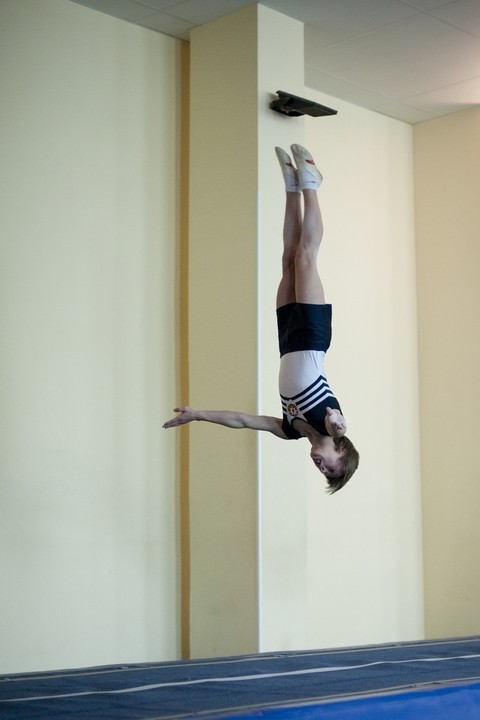 An Azerbaijani gymnast Mikhail Malkin became the all-around winner of the traditional international tournament in tumbling held in Vinnitsa last weekend!
According to the press service of Azerbaijan Gymnastics Federation, the 16-year-old tumbler of Baku Gymnastics School demonstrated the top performance on the Ukrainian track. A superb execution technique of twist exercise and a height of somersault combination together with a difficulty of combined jumps made him unreachable for the remaining 11 participants of the juniors’ tournament.
“It is not my first participation in these competitions but I have managed to win a victory and raise the cherished Cup over my head for the first time”, Malkin said in his interview to the Ukrainian TV. “The European Championships are approaching and I will do everything in my power to demonstrate more successful performance there as well.”
“But I was not surprised at his all-around victory,” a well-known Ukrainian specialist Leonid Golyak stated. “I would like to emphasize that Malkin executed the final exercise with more confidence in comparison with two previous ones, while many gymnasts did the contrary.”
“As to his prospects, I think it is necessary to increase the jumps’ difficulty gradually taking into account that he will continue in a senior category soon. I believe he will grow up in all senses and show quite different results by the forthcoming European and World Championships.”
The national banner of Azerbaijan directed towards the dome of Vinnitsa Sports Complex in our gymnasts’ honor three more times. So, a tumbler Hafiz Rzayev who competed in the seniors’ category became the bronze medalist losing to the home jumpers.
Finally, women’s pair consisting of Afag Maharramli and Parizad Guliyeva won the silver medals, and a mixed duet Ibrahim Rajabli – Emiliya Nazarli took the 3rd place.