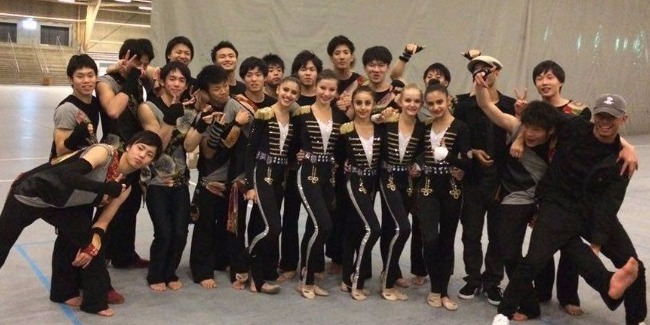 Last weekend, an Azerbaijani 2015’s Junior Group in Rhythmic Gymnastics took part in the DGI 2016 International GymShow in Denmark. The Group, called “Jacksons” after gaining popularity in Europe with their performance with 5 balls to the music of a legendary pop king - Michael Jackson's famous song “Smooth Criminal”, were invited to the show by the Organizers – Danish Gymnastics and Sport Associations. “Jacksons” thrilled the audience with their beautiful composition in Danish Aalborg, Herning and Farum cities.

The show is taking place once every second year with the aim of presenting the Danish audience world class performances by international athletes and artists from the worlds of gymnastics, dance and circus. All of them are combined with performances by the National Danish Performance Team - a team of 28 selected male and female gymnasts that tour the world with a combination of gymnastics, tumbling, vaulting and dance.

The story of “Jacksons” and their composition with 5 balls started when the girls were gathered together to form a junior group to represent Azerbaijan at 2015 European Championships in Minsk (Belarus). The original composition of the group stopped a step away from the bronze medal at the European Championships had been as follows: Ilaha Mammadova, Fatima Jafarova, Simara Jafarova, Sorokina Darya and Zuleykha Ismayilova. There was a slight change in the composition of the group, who performed at DGI International GymShow 2016. Zuleykha Ismayilova was substituted by Zohra Aghamirova.

The most exciting part of the composition, constructed and choreographed by Head Coach of the Azerbaijani Rhythmic Gymnastics National Team Mariana Vasileva, is dance steps. Their synchronised execution of the steps belonging to legendary Michael Jackson are still popular in Europe. The girls willingly demonstrated how to make these movements to the show’s other performers during the breaks.