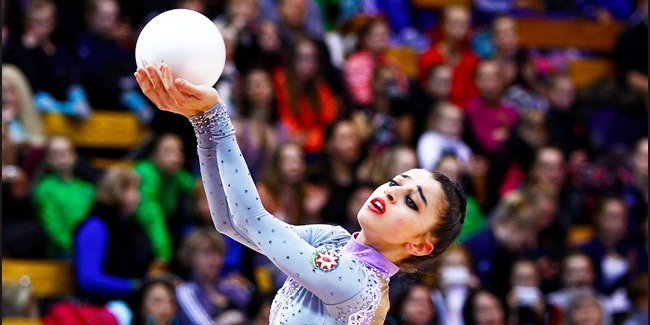 The second day of the European Championships in rhythmic gymnastics in German Bremen has brought the second medal to the Azerbaijani team.

A 14-year-old gymnast from Baku Lala Yusifova achieved a great success having taken the 2nd place in an exercise with a ball. Her result in the final is 25.65 points.

This a first medal in the competitions of individual junior gymnasts in the history of Azerbaijan!Young Lala, the silver medalist of the European Championships, shared her first impressions with us.

“I trained a lot and hard, so I am pleased with “silver” as if I have won the “gold”. I am happy that I have not put in a spot my coach, team, I have justified expectations of our Federation. I showed that Azerbaijan has worthy juniors,” she said.

Yusifova won the 4th place in a qualification with a ball.

“Prior to her appearance on the floor, I told Lala: go and perform as you did during you last training in Baku,” the head coach of the Azerbaijani national team, Mariana Vasileva, recalls. “So, she performed in a way that won a medal.”

Another Azerbaijani gymnast Jala Garatova performed with clubs and won the 9th place. Thus, the Azerbaijani national team took the 5th place in a team competition with a total result of 97.775 points. Two years ago, the national team of Azerbaijan was the 14th, and, now, it has risen for 9 positions! This is another great success of Azerbaijani rhythmic gymnastics!

Nevertheless, our collective reached the both finals to be held on April 18.