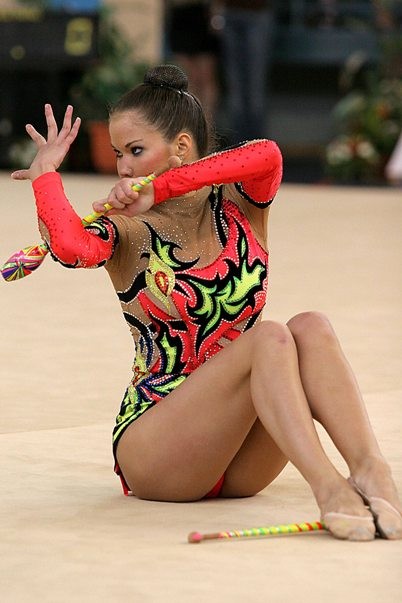 A group team of Azerbaijan has won silver medals of the international tournament in Holon, Israel.

According to the press service of Azerbaijan Gymnastics Federation, our collective received 16.625 points for the first exercise (3 hoops/4 clubs), and 0,025 points more for 5 ropes. As a result, Vafa Huseynova, Anna Bitiyeva, Valeriya Yegay, Alina Trepina and Anastasiya Prasolova took the second place after the floor’s hostesses.

“I consider the results of the tournament in Israel as good ones,” Mariana Vasileva, the team’s coach, stated on its completion. The girls performed very well, their performance with 5 ropes was better than the Israel’s performance and the judges also liked it.”

“We had a very good support. The fans from the International Israel-Azerbaijan Association and its Baku branch office were the most active fans. I think we approached to the European Championships, which will start in a week in Italy, in a very optimistic mood!”

Dinara Gimatova and Anna Gurbanova, having performed in the Grand Prix events in Israel, held their last preparatory tournament before Euro-2008 as well. Dinara gave her best results in the finals with a hoop (17.675) and a ribbon (17.55) – the 5th place, the 7th place – in the all-around.

And Gurbanova was the eighth among 8 strongest gymnasts both with a rope (16.75) and clubs (16.625), as well as in the all-around. A Russian Vera Sessina, who became the first in all kinds of the program, had no equals in that tournament.

Another Azerbaijani gymnast Zeynab Javadli took part in the international tournament among seniors in Holon. The representative of “Neftchi” needed only 0.8 points in order to become the third in the all-around: the result – 60.1 points after sportswomen of Uzbekistan, Ukraine and Estonia.

An Azerbaijani artistic gymnast Shakir Shikhaliyev, performing in the Cup of an Olympic champion A.Dityatin in St. Petersburg, could have won a bronze medal as well. But his participation as a junior in the group of seniors and lack of competing experience adversely affected his performance. As a result, 4 final places on free exercises, vault and bars, and also the 8th place on a pommel horse were taken from the city on the Neva together with a memory of its white nights, the majestic Hermitage and famous expanding bridges.

In the all-around, Shakir took the 16 place among 23 competitors having received 74.5 points, where the first three places were won by Russian gymnasts.

The world cup events in acrobatic gymnastics also had a place in the weekend, saturated with tournaments. Azerbaijan was represented in Publier Amphion, France by a woman’s pair (Ayla Ahmadova and Dilara Sultanova) and a man’s group (Rustam Najafguliyev, Ilham Abbasov, Elnur Mammadov and Farid Mammadov). The woman’s pair reached the final first, having easily overcome the qualification. Having unsuccessfully executed a pyramid in the balance exercise, the group neatly performed in the tempo composition and the organizers qualified it for a final from the 8th place. Our pair took the 6th place and the group became the 7th in a mixed exercise in the final part of the Cup.

And one more tournament in rhythmic gymnastics among juniors has come to the end in Yaroslavl. Making a debut in the international tournament, a 12-year-old Aynur Jabbarli took the 21st place in the all-around, having also received a special prize as the “Most Graceful Participant of the Tournament”.