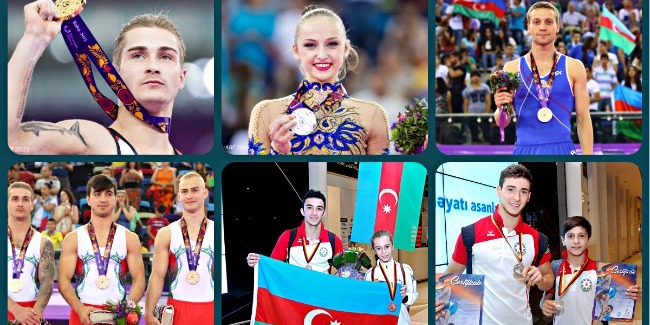 157 – this is the exact number of medals won by our gymnasts in 2015. Most of them were brought to the homeland by the representatives of Rhythmic Gymnastics. They won 81 medals. Then, here come Men’s Artistic Gymnasts with 32 medals followed by acrobats having 15, Women’s Artistic Gymnasts with 11 medals, and, finally, representatives of Trampoline gymnastics and Aerobic gymnastics with 9 medals each.

Most of them are in Marina Durunda’s (22) medal box. Just one medal less was taken by her team-mate Zhala Piriyeva (21) and a gymnast Oleg Stepko who ranked 1st in the list of Azerbaijan Gymnastics Federation.

Undoubtedly, the 1st European Games were one of the major competitions of the year. Oleg Stepko became the only Azerbaijani athlete who won 5 medals with one gold on parallel bars. He was awarded with one more medal in a team competition together with Eldar Safarov and Petro Pakhnyuk. Ilya Grishunin was honoured with “bronze” in Trampoline Gymnastics competitions and Marina Durunda with “silver” in Rhythmic Gymnastics ones for her performance with a ribbon. In general, ribbon turned out to be Marina’s most successful apparatus of the last year. She also won the “bronze” in exercises with a ribbon to the music of the great composer Uzeyir Hajibeyli called “Fantasy” at the European Championships. Our acrobats took medals at the European Age Group Competitions for the first time. The “silver” was won by men’s pair Seymur Jafarov/Murad Akparov and the “bronze” by mixed pair consisting of Aghasif Rahimov and Nurjan Jabbarli.

A two-time Rhythmic Gymnastics European Championships’ prize-winner Gulsum Shafizada was presented with a flat from the hands of the country’s President Mr. Ilham Aliyev. According to the results of the year, Gymnastics Federation was acknowledged to be the best federation and Milli Gimnastika Arenası (National Gymnastics Arena) - the best Arena by the Ministry of Youth and Sports of the Republic of Azerbaijan.

On December 24, there took place the 6th General Assembly of the Federation, where Mrs Mehriban Aliyeva was re-elected as its President. According to the results of the voting, Altay Hasanov will proceed his activity as the Vice-president while Rauf Aliyev and Rafig Beybutov will continue to be the members of the Executive Committee. Mariana Vasileva became the Committee’s new member.

And the year has come to the end with a splendid show called “A Dream on New Year’s Eve” performed by coaches and gymnasts of the national teams in gymnastics disciplines which took place on the same Milli Gimnastika Arenası.

2016 does not seem to be an easy one. Our athletes will take part in different international events, the European and World Championships, and, most importantly, in the Olympic Games in Rio de Janeiro. Marina Durunda and Oleg Stepko already qualified for these Games. There is still a chance to be qualified for Rhythmic Gymnastics team in group exercises and representatives of Men’s and Women’s Artistic Gymnastics with one gymnast each in April.

We hope and believe in successful performances of our athletes in 2016.