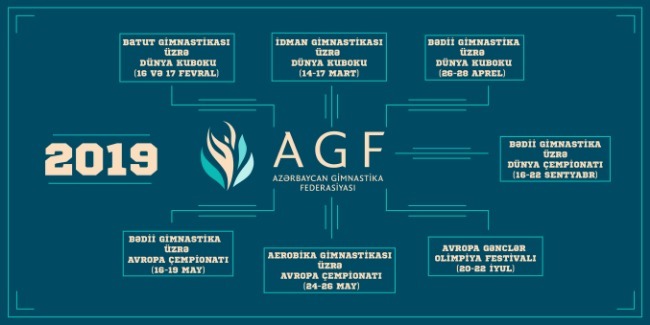 Azerbaijan Gymnastics Federation has presented a calendar of international competitions in gymnastics disciplines to be held in Baku in 2019.

Thus, the Federation, having the saturated working plan next year as well, will start the 2019 with the Trampoline Gymnastics World Cup AGF Trophy scheduled for February 16-17.

A month later, on March 14-17, the Field of Play will belong to Artistic gymnasts. The World Cup in Artistic Gymnastics will be held in Azerbaijan within this period for the fourth time.

April and May will be remarkable with the performances of Rhythmic gymnasts. The World Cup in this gymnastics discipline will be organized on April 26-28, followed by the European Championships several weeks later – on May 16-19.

This year, for the first time, the Federation will host the European Championships in two gymnastics disciplines. Thus, following the Rhythmic gymnasts, the strongest Aerobic gymnasts of the whole continent will gather in our capital on May 24-26.

The European Youth Olympic Festival will be held in our city on July 20-28, 2019 for the first time. The events in Artistic Gymnastics to be held within the framework of the festival will also take place at Milli Gimnastika Arenası (MGA, National Gymnastics Arena).

One of the main peculiarities of the World Cups in Artistic Gymnastics and Trampoline Gymnastics, as well as the World Championships is that they will qualify for the Olympic Games 2020.

It should be mentioned that the organization of all these international events at MGA will make happy our committed gymnastics fans. They will be able to watch International Gymnastics competitions from the seats belonging them personally, by purchasing "Seasonal Ticket" with favourable prices.

In conclusion, we would like to wish best of luck and support of the audience to all the gymnasts who are going to represent our country in these competitions, as well as in other international tournaments.