3 SILVER AND 3 BRONZE MEDALS FROM ESTONIA 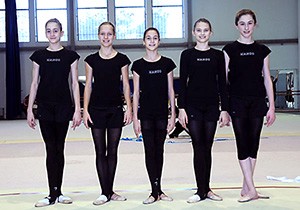 The gymnasts, who appeared before the Baltic audience in bright red leotards with fiery composition consisting of 5 ribbons and accompanied by gypsy music, had taken the third place after the first day of the competition.

“Thus, the teams’ first performance was successful,” the collective’s coach, Mariana Vasileva, said with an unconcealed delight on the tournament’s completion. “My gymnasts mastered the mechanism of taming of a ribbon well but the coaches still have something to work at. By the way, it was also noted by the colleagues from Russia and Belarus, whose groups took the first two places. Now, our next performance will be in the international tournament in Budapest on March 6-8. And the gymnasts will be in excellent form just right by May, the time when the Euro-2009 to be held,” she concluded.”

But not only gymnasts from the country’s junior group team were happy at their medals and were simultaneously looking at raising national banner. A thirteen-year-old Aysha Mustafayeva from Baku won 3 silver medals and 1 bronze medal in this tournament. Aysha became the second with a rope, a hoop and a ball (19.63 points) giving identical results with the first two apparatus (20.25). She could have also won the fourth silver medal but she took the third place with the clubs with the points identical to those with a ball having lost only 0.02 points to a Bulgarian Steliana Yankova.

One more Azerbaijani gymnast won bronze medal on the Estonian floor. A twelve-year-old Yekaterina Prokopenko from Baku took the third place in exercises with a ball – 19.5 points. With a hoop (18.05) and clubs (14.4), she won the eighths places.