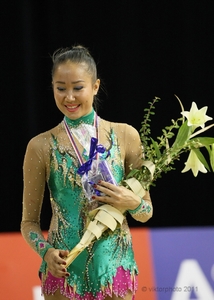 An Azerbaijani gymnast Aliya Garayeva has won five bronze medals at the Grand Prix held in Czech Brno.
According to the press service of the country’s gymnastics Federation, the national team’s leader had already supported her reputation on the competitions’ first day. Having received 114.65 points in the all-around, Garayeva took the 3rd place and reached all the four finals. Only a Russian duet – Yevgeniya Kanayeva and Darya Dmitriyeva took the lead over our gymnast.
The competitions’ second day brought another 4 awards to our gymnast. And, Garayeva repeated the “bronze” success again but with separate apparatus this time. Aliya caught the spirit on the floor to such an extent that began to receive high points, and, for one of them - for her performance with a ribbon - the scoreboard showed 29.175 points! “After the French World Championships, I was in recess for two weeks period. And, now, I am very content with my performances and with the points received from the judges,” Garayeva said. “Just imagine, in the ribbon which was perfectly executed, the judges had nothing to do but assess Kanayeva’s performance at maximum - 30 points!” “I am invited to perform at the “Serie A1” Italian Championship this year as well. So, I am flying to Fabriano for the first tour which to be held on October 22,” the gymnast informed.
And our other sportswomen will set out for Izmir. On October 20-23, there will be held an international tournament with the participation of Azerbaijani gymnasts in this Turkish city, one of the ancient cities in the Mediterranean and famous for its peach gardens.