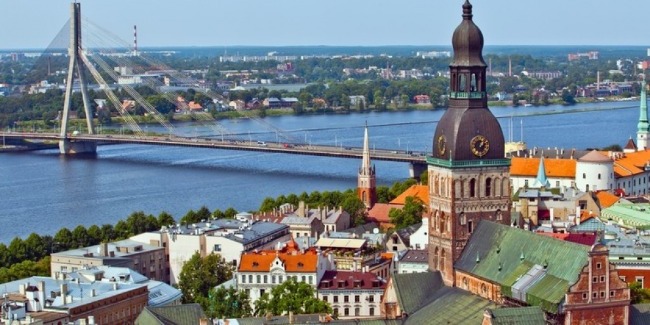 An Azerbaijani junior group team has become a winner of the “Baltic Hoop” international tournament held in Riga!

According to the press service of Azerbaijan Gymnastics Federation, the collective consisting of Lala Yusifova, Aysha Mustafayeva, Mansura Bagiyeva, Aynur Jabbarli, Siyana Vasileva and Sabina Garatova impeccably performed a composition with 5 ropes, and Azerbaijani tricolor raised high into the air to the music of our majestic National Anthem. Our girls, at all points, took the lead over the strong collective from Saint Petersburg and the Estonian team which took the second and third places accordingly.

And, that evening, the Azerbaijani banner two more times raised under the dome of the sport complex of Riga in honor of Zeynab Javadli. After the performances with a ball and clubs, she took the third place allocated on the podium for the bronze medalist. The same situation could have been in the all-around but Zeynab content herself with the 4th place among 22 competitors.

“But that is not all,” the head coach of the country’s national team, Mariana Vasileva, says with unconcealed gladness. “Right away the completion of the tournament, Zeynab was announced the “Miss Elegance” and “Miss Sympathy” of all artists in the hall. Namely artists, I made no mistake! Curiously enough, this creative people assessed the gymnasts’ performances at Gala.”

“What do I feel? I am very content with performances of our gymnasts. In addition to the prize-winning places, they left a good impression. Both Zeynab and group gymnasts showed a progress in their work.”

“As to the next event, it will take place during the days of celebration of favorite “Novruz” holiday. Another World Cup series and international tournament will be held in Italian Pesaro city on March 23-27, where Aliya Garayeva and Anna Gurbanova, a senior and junior group teams, as well as junior gymnasts - 13-year-old gymnasts Laman Dadashli and Gulsum Shafizada took part in,” the Azerbaijani rhythmic gymnastics national team’s head coach summed up.