A bronze medal from Zhala Piriyeva... 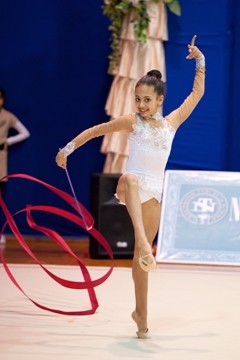 A young Azerbaijani gymnast Zhala Piriyeva has won the bronze medal at the international competition held in Moscow within the framework of the first Grand-Prix Series.

According to the press service of Azerbaijan Gymnastics Federation, the 13-year-old gymnast took the third place (55.383 points) in the all-around among juniors after the floor’s hostesses and Ukrainian athletes. And, in fact, she was one of the youngest participants and competed with the elder gymnasts born in 1998-1999.

As to the Grand Prix itself, the country`s gymnast Marina Durunda qualified to three finals from four possible ones where she showed her best result with a ribbon finishing not far from the poidum - the 4th place. In the final she took the 5th place with a hoop, the 8th place with the clubs and the 7th place in the all-around.

According to Mariana Vasileva, the head coach of the National team, "her gymnast left exceptional impression on the audience.” “Even music stoppage for unknown reasons during her performance with a ribbon, didn`t ruin Marina`s spirit and didn`t prevent her from excellent performance! And a living legend of rhytmic gymnastics Alina Kabayeva personally noted her as the very artistic and promising athlete," she said.