A member of the International Federation`s Technical Committee: Azerbaijani Artistic Gymnastics has a good groundwork for the future 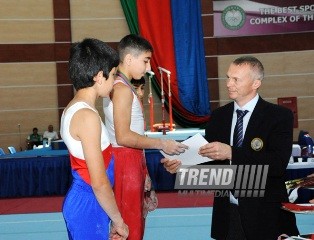 The joint gymnastics tournament, held at "Sarhadchi" Sports Complex, has revealed some interesting facts and results.

Thus, for the first time, a graduate of Baku Gymnastics School, Aydin Aliyev, became the Azerbaijani champion in tumbling, who was previously in the shadow of his teammate Mikhail Malkin taken the second place. Aliyev executed both final exercises without any significant mistakes and deservedly won the gold medal.

In the competitions of acrobats, where, by the way, 53 athletes competed in, the ball was still ruled by the senior women‘s pair Aynur Huseynova and Narmin Ramazanova, junior duet Lala Huseynova-Khoshgadam Guliyeva, as well as by the representatives of the senior men’s pair Elchin Alibayov and Emin Gulmammadli.

Shakir Shikhaliyev celebrated a victory in the artistic gymnasts’ tournament. Actually, he had to work hard to win as after an execution of the second exercise (pommel-horse), he had been losing 0,5 points to Ughur Khalilbayli. However, the experience and accurate performance, especially on rings and parallel bars, returned him to the top. Ruslan Namazov also took advantage of Ughur`s mistakes leaving him behind for 1.5 points.

The joint gymnastics tournament brought together not only our leading athletes but also four foreign judges of the international category who arrived in Baku on Azerbaijan Gymnastics Federation’s invitation. One of them was a Latvian Arturs Mitskevichs, the member of the International Federation’s Technical Committee.

"This is my first visit to Azerbaijan. I didn`t have an opportunity to judge in Baku even in USSR times and I'm glad that I have come here. The city, as well as the sports facilities, and, in general, scope of construction works made a great impression on me. It is evident that there are many opportunities. And, taking into account this fact and the resources of the world gymnastics, it is possible to achieve very significant results.”

“I liked your young gymnasts very much who may eventually grow into good strong athletes. And the progress existing in the senior team is quite noticeable. My impressions made me confident that the team will prove itself on the international arena soon.”

“In men's gymnastics, athletes are gaining the real strength after their teens and only a few become great sportsmen earlier", summed up the international judge from Latvia.