A STEP AWAY FROM “BRONZE” 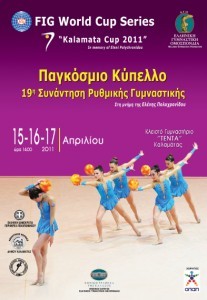 Another World Cup series in rhythmic gymnastics has come to an end in Greece Kalamata where Aliya Garayeva, Zeynab Javadli and the country’s group team took part in.

According to the press service of Azerbaijan Gymnastics Federation, the national team’s leader Aliya Garayeva performed in all the finals of the Cup and showed the best result in an exercise with a hoop having taken the 4th place with 27.6 points. She was just 0.1 points behind from a Russian Darya Kondakova who won the “bronze”. And one more 4th place was taken by Aliya in the all-around having lost to two Russians Darya Dmitriyeva and Kondakova, as well as to a Belarusian Lyubov Charkashina.

Garayeva became the 8th with clubs and a ribbon, and the 9th with a ball. And the winners in the finals were announced Kondakova (a ball and a ribbon) and Charkashina (a hoop) as well as a Bulgarian Silvia Miteva (clubs). Another Azerbaijani gymnast Zeynab Javadli showed the 14th result in the all-around among the 36 competitors.

As to the Azerbaijan’s group team, according to the total results of 2 exercises, the collective consisting of Jeyla Guliyeva, Sabina Abbasova, Anastsiya Prasolova, Ayelita Khalafova, Stefani Trayanova and Yevgeniya Zhidkova reached the final with 5 balls where won the 4th place. The victory was celebrated by the team of Israel, teams from Bulgaria and France became the 2nd and the 3rd accordingly.

The next World Cup series (April 21-24) in Nizhny Novgorod and an international tournament among juniors in Minsk will be held at the end of this week where our two gymnasts - Gulsum Shafizada (born in 1998) and Laman Hajizada (born in 1999) - will perform at.