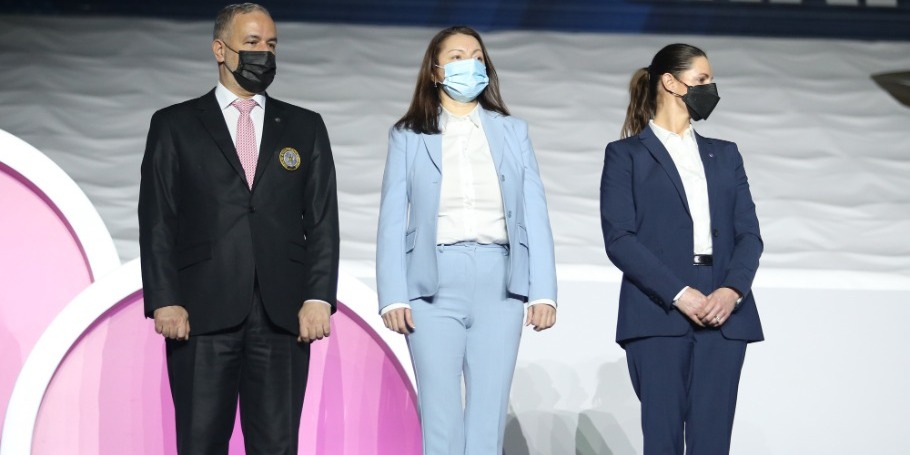 The Opening Ceremony of the 12th FIG Acrobatic Gymnastics World Age Group Competitions was held at “Milli Gimnastika Arenasi” (National Gymnastics Arena) in Baku.
The ceremony was attended by Deputy Minister of Youth and Sports of the Republic of Azerbaijan Mariana Vasileva, member of the Executive Committee of the International Gymnastics Federation (FIG) Mohammed Youssef Al-Tabbaa.
Welcoming the participants, Deputy Minister of Youth and Sports Mariana Vasileva noted that, the 12th FIG Acrobatic Gymnastics World Age Group Competitions is one of the traditional sports organized for the first time in Azerbaijan. She also mentioned that it was gratifying.
She was pleased that the competitions coincided with the "Week of Sports" taken place in our country on March 5.
A member of the FIG Executive Committee greeted the gymnasts and wished them success. He expressed his gratitude to the Local Organizing Committee and to all volunteers for their hard work in organization the competitions at high level.
It should be mentioned that the 12th Acrobatic Gymnastics World Age Group Competition will be held on March 3-6 at Milli Gimnastika Arenası. 438 gymnasts from 24 countries take part in this competition organized in our country for the first time.
Gymnasts compete within Men’s Pairs, Women’s Pairs, Mixed Pairs, Men's Groups, Women's Groups in Balance, Dynamic and Combined exercises in the 12-18 and 13-19 age groups.
Azerbaijan is represented by Men’s Pair - Rasul Seyidli, Ravan Zeynalli, Women’s Pair - Nazrin Gasimova, Khanim Mammadzada, Mixed Pair - Milana Aliyeva, Nizam Khamidulin, Women’s Group - Anahita Bashiri, Zahra Rashidova and Nazrin Zeyniyeva in the 12-18 age group, while Leyla Bashirova, Nazrin Farmanova and Mansuma Mammadzada will compete within Women’s Pair among the gymnasts aged 13-19.