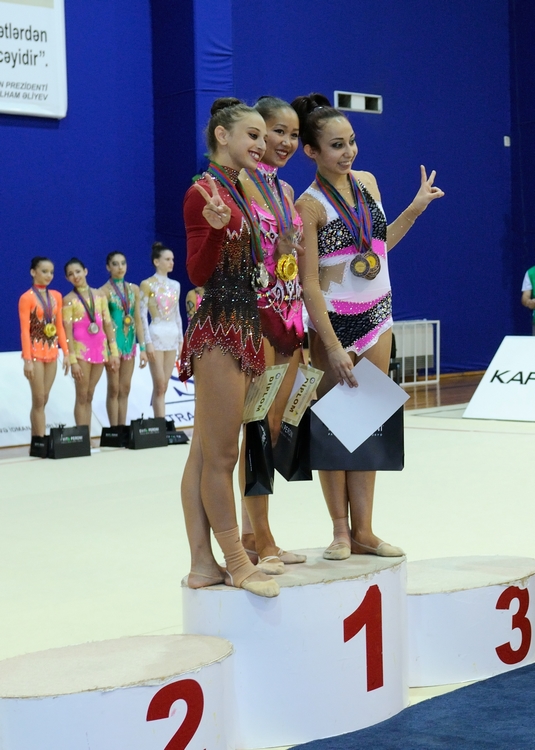 Aliya Garayeva has become the 5 time Azerbaijan champion in rhythmic gymnastics! In the course of the country’s next championship, the national team’s leader won the first places both with separate apparatus and in the all-around. And even a slight mistake in her performance with a ribbon in no way had an impact on medals’ layout and general picture.

Silver and bronze medals of the senior tournament were tried on by Lala Yusifova and Aysha Mustafayeva for the first time who already had awards from the European Championships among juniors.

The recent European Championships’ bronze medalist with a hoop Nilufar Niftaliyeva won an unconditional victory in the event of gymnasts born in 1997-99. The “silver” was won by a reserve participant of the Euro-2012 Mansura Bagiyeva, and the third place was taken by another bronze medalist of the continent’s Championships Gulsum Shafizada. Change of places occurred only in the case of a ribbon where the medalist, who won the European award namely with this apparatus, looked better than the “reserve”.

The tournament was followed by an incredibly colorful Gala with a participation of prize-winners with young gymnasts, as well as artistic gymnasts with acrobats, who demonstrated inflammatory numbers with illuminating effects. And the Gala came to an end with a touching ceremony – official farewell with the first representative of Azerbaijan at the Olympic Games-2004 in Athens, the European and World Championships’ repeated prize-winner Anna Gurbanova leaving the big-time sports. Every participant of the competitions gave Anna a flower, and the Secretary General of Azerbaijan Gymnastics Federation Farid Gayibov presented her a special Cup.

“Big-time sports are wonderful but it is necessary to leave it at the proper time and wait until the young generation moves you back. I express my gratitude to Azerbaijan Gymnastics Federation and its President Mrs Mehriban Aliyeva for offering me an opportunity to perform at the large-scale competitions including the Olympiad. In principle, I was ready and knew that I would cease to perform this year. I demonstrated my last performance at Gala in Baku which I presented to all the people who sincerely loved me, always believed in me and supported me. The most memorable event for me will always be the European Championships-2009 in Baku where I became a prize-winner not in the team but in the individual competitions with a ball for the first time. That “bronze” is very valuable to me. As to my immediate plans, I would like to be a coach and try to start judging,” Gurbanova noted.

And as to active gymnasts, 8 sportswomen were given certificates for masters of sports. Zhala Garatova, Madina Hasanova, Lala Yusifova, Lala Maharramova, Aysha Mustafayeva, Aynur Jabbarli, Kamilla Mammadova and Mansura Mehdiyeva were honored with this title.

Upon completion of the national championship, the countries already 5-time champion Aliya Garayeva said: “I am very happy to become Azerbaijan champion again. The organization level of the championship, like all the competitions held by our Federation, was high. There is Olympiad in London ahead where my main rivals will be gymnasts from Belarus, Bulgaria and Ukraine besides Russians. I know that whole Azerbaijan will support me and I hope I will demonstrate a worthy performance.”

The gymnasts’ performances were also judged by five foreign specialists. The judges from Latvia, Serbia, Slovenia, Mexico and Republic of South Africa came to Baku. Dragana Terzic, the representative of Serbia, shared her impressions of the championship, Azerbaijani gymnasts and wished Aliya Garayeva successes at the Olympic Games. “I was looking forward to my travel to Azerbaijan,” she says. “I know, how strong you gymnasts are – both seniors and juniors. Your young sportswomen are very prospective and promising. The results of the European Championships in Nizhny Novgorod as well as present Azerbaijan championship proved it. And Azerbaijan Gymnastics Federation – is one of the leading ones in the world. Your national team’s leader is undoubtedly Aliya Garayeva. I wish her a splendid performance at the forthcoming Olympiad. I think she is one of the main contenders for the Olympic medal.”