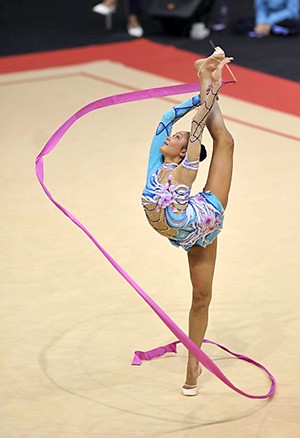 According to the press service of Azerbaijan Gymnastics Federation, the participant of the Olympic Games in Beijing took the third place in exercises with a rope. She received 18.075 points from the judges and lost only to Russian gymnasts – Vera Sesina and Olga Kapranova.

The representative of “NeftchI’ Sports Health Center will set out for Japan situated on the islands of the Pacific Ocean from the coastal Spanish town washed by the Mediterranean Sea. The World Championships among clubs will take place in the country’s capital on October 10-12. Zeynab Javadli and a junior Samira Mustafayeva are in the composition of “Neftchi” as well.

Meanwhile, the World Age Group competitions in acrobatic gymnastics came to the end in Scottish city of Glasgow situated on the British Isles of the Atlantic, where an Azerbaijani pair consisting of Elchin Mammadov and Emil Yarakhmadov took part.

According to the result of final performance with combined exercise, our pair received 27.35 points and took the 6th place again, taking the lead over the representatives of Armenia and Portugal. Russian acrobats became the winners of the events, the second place –acrobats from Germany, the third place – acrobats from Belarus.

Glasgow will remain the center of the world acrobatics this week as well. The World Championships will start there on October 10, where our women’s pair, Ayla Ahmadova – Dilara Sultanova, and men’s group consisting of Rustam Najafguliyev, Ilham Abbasov, Elnur Mammadov and Farid Mammadov will take part.