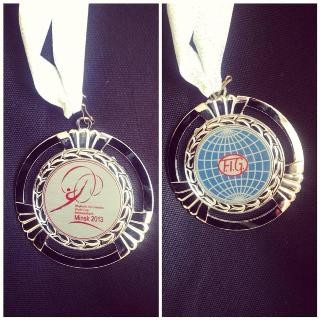 According to the press service of Azerbaijan Gymnastics Federation, the team consisting of Sabina Abbasova, Irada Ahadzade, Mansura Bagiyeva, Sabina Garatova, Siyana Vasileva and Aliya Pashayeva, took the second place in the final of an exercise with 5 pairs of clubs having taken the lead over the Olympic Champions from Russia.

"And in the all-around qualification for the final competitions, our team became the 4th losing only 0.1 points to three-time World Champions from Italy", says the head coach of the National Team, Mariana Vasileva. "In the sum of two exercises, the girls performed well in the exercise with balls and ribbons but the final combination went wrong from the very beginning and they took the 6th place as a result. In any case, I`m content with their performances like with the results of a gymnast Marina Durunda who introduced herself in all four finals of the World Cup.”

She showed the best result in the final with a hoop where she took the 4th place. With a ribbon, the 16-year-old athlete became the 5th, the 6th with clubs and in the all-around, and, finally, the 7th with a ball.

Our second gymnast Lala Yusifova qualified only for the final with a ball where she was last in the list of the best eight competitors.

And the Russians Yana Kudryavtseva and Daria Svatkovskaya as well as the floor’s hostess Melitina Stanyuta became the winners in Minsk.

In 10 days, from May 31 to June 2, the motherland of the great composers like Mozart and Strauss, Austria will host the great European festival. 24 junior group teams and senior gymnasts, representing 32 countries, will gather in Vienna for another European Championships. Azerbaijani gymnasts - Lala Yusifova, Marina Durunda and the junior team consisting of Nilufar Niftaliyeva, Gulsum Shafizada, Sabina Hummatova, Aliaksandra Platonova, Emilya Bagiyeva and a reserve gymnast Aynur Mustafayeva are also among the gymnasts competing for 7 sets of medals.