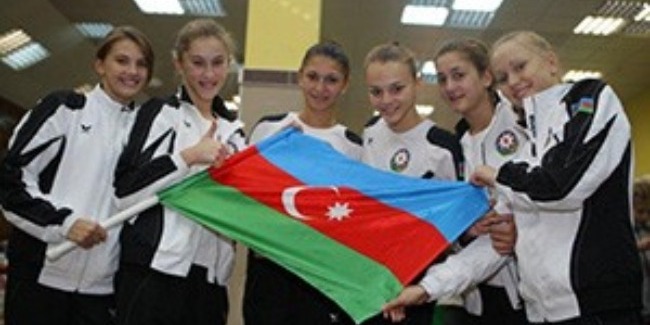 On the final day of the World Championships in rhythmic gymnastics in Moscow, the group teams’ gymnasts have been competing for the medals with separate apparatus.

In the first final with hoops, an Azerbaijani group team consisting of Nigar Abdusalimova, Jeyla Guliyeva, Ayelita Khalafova, Anastasiya Prasolova, Stefani Trayanova and Yevgeniya Jidkova became the eights among 8 groups-finalists. The judges were not so favorable having assessed our gymnasts’ performance in 25.35 points.

The Russian gymnasts became the Champions on this program having gained revenge over Italian gymnasts for the yesterday’s failure in the all-around. Italy won the second place and the third place was taken by a Bulgarian team.

In the second final with three ribbons and two ropes, the Russians also became the first, leaving behind the Italians again. The third place was won by Belarusian gymnasts. The Azerbaijani team received only 25.375 points. Our gymnasts took the 7th place in the final’s total protocol.

Azerbaijani sportswomen managed to reach both finals with separate apparatus, which, for example, was not possible for the traditionally strong Bulgarian team. According to local commentators, it is a very worthy result for a young team with an aim for perspectives and progress.

”Our performance was not bad but we expected to receive higher points. It was the idea of our head coach Mariana Vasileva to perform to the accompaniment of “Lezginka” and we with pleasure put it into practice. There are many teams which we consider as our serious rivals, but, we expect success every time we appear on the floor,” the girls said.

And a magical Gala completed the rhythmic gymnastics festival where this championship’s winners, as well as sportswomen of the past years, performed. One of the present coaches of the country’s national team, an honored master of sports of Azerbaijan Dinara Gimatova was also among them.

The next rhythmic gymnastics World Championships will be held in Montpellier in 2011. In France, the World Gymnasts will also compete for the licenses of the Olympic Games-2012 to take place in London.