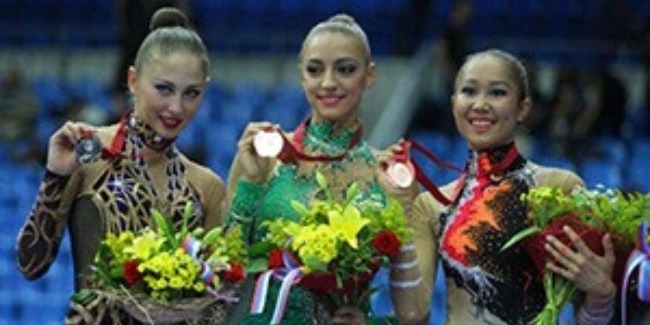 Today, finals with a rope and a hoop have taken place at the “Olympiysky” Sports Complex in Moscow. An Azerbaijani representative Aliya Garayeva performed with both apparatus. She won the third place in exercises with a hoop having received 27.650 points. The Azerbaijani gymnast managed to surpass her rivals from Ukraine and Belarus.

Earlier, the only gymnast representing Azerbaijan in exercises with a rope, Aliya Garayeva, could have won the third place. She received 27.250 points for her performance. As a result, she lost only 0.05 points to a Ukrainian representative Alina Maksimenko (27.300). But, then, a Belarusian gymnast Stanyuta Melitina rushed into a group of three first gymnasts having splendidly performed with a rope and received 27.650 points.

As a result, the Russians Yevgeniya Kanayeva and Darya Kondakova mounted the first two steps of podium, and Melitina Stanyuta mounted the third one.