AN AZERBAIJANI GYMNAST PERFORMS IN THE EUROPEAN CHAMPIONSHIPS IN MILAN 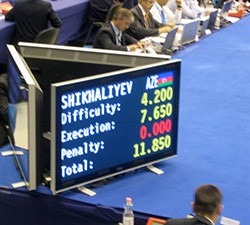 Competitions in the all-around qualification have taken place in the European championships in artistic gymnastics in Milan today.

According to the lots, an Azerbaijani gymnast Shakir Shikhaliyev found himself in the third sub-group together with sportsmen from Georgia, Israel and Belarus. Shakir gave his best result performing on vault and received 15.375 points. Grand total is 76.95 points and 43rd place among 151 participating gymnasts.

“It should be mentioned that a gymnast Shikhaliyev, who have joined the senior group this year, did not quail before well-known rivals. He demonstrated quite good performance, and did not fall off any of 6 apparatus.”

These words were uttered by one of the reputable person in the gymnastics world, Yuri Titov – a legendary gymnast in the past, who, later, had been heading International Federation on this sports discipline for 20 years.

“I had an eye on him during his performance at the last year’s European Championships in Lausanne, when he was still a junior,” Y.Titov went on. “He is fit, his muscles are well worked out; I think he is also an intelligent as his eyes are burning. And you cannot imagine how it is important in today’s gymnastics which is swiftly developing throughout Europe. I advise to his coaches to continue their work on the desired heading, and I also advise to the young gymnast to follow the routine of the training process, especially, as I know he is at the training camp in Germany and he is training under the responsive guidance of such specialists as Valery Belenky and Anatoly Yarmovsky who prepare high class gymnasts. If they continue the work they started, he will be a strong and beautiful gymnast as a result.”

If the championship has come to an end for a gymnast Shikhaliyev, the tournament will still being continued for a judge of the international category Rza Aliyev tomorrow as well, when 24 best sportsmen according to the today’s qualification results will compete for the title of European absolute champion. If, today, Aliyev has been included into the panel of judges assessing performances on the horizontal bar and was paid a compliment for the unbiased judging by the technical committee’s head, he will join the referees’ composition on the vault according to the lots on April 4.

The contest for the championships’ Milanese medals enters into a crucial stage. There are many contenders for them in the all-around, as well as among specialists in separate apparatus.