AN AZERBAIJANI JUDGE IN RHYTHMIC GYMNASTICS HAS RECEIVED THE HIGHEST LEVEL OF THE INTERNATIONAL CATEGORY! 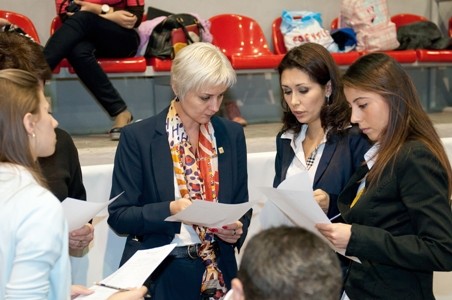 Azerbaijani judges in rhythmic gymnastics Natalya Bulanova and Leyla Gambarova have received new levels of the international category for the next Olympic Cycle.

According to the press service of Azerbaijan Gymnastics Federation, from now on, N. Bulanova has the highest level of the international category – Brevet 1.

The fact that Azerbaijani arbiter was given such a category for the first time in history of the national gymnastics, once again, proves that a right choice had been made by the National Olympic Committee which announced N. Bulanova as the fairest judge in the country.

Such a decision was made according to the results of the Intercontinental Judges’ Courses held in Bucharest. During the workshop organized by the Rhythmic Gymnastics Technical Committee of the International Gymnastics Federation (FIG), she took a practical course on new rules and successfully passed the test.

From 119 participants of the course, only 27 have obtained the first category and the representative of Azerbaijan is also among them. In general, these are European judges and only four of them represent Asia.

The judge, holding Brevet 1, will share acquired skills with her colleagues soon.

“I will conduct a workshop for local judges in the course of which I will talk about new developments in rhythmic gymnastics. Local specialists taken the course will participate in the international course for the judges which to be approximately held in Baku in the middle of next March,” N. Bulanova summed up.

It should be mentioned that the second participant of the Romanian workshop L. Gambarova completed the course with a Category 3. But in the course of the new cycle, she can repeat an examination for obtaining the 2nd level.