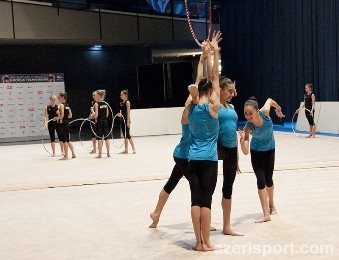 According to the press service of Azerbaijan Gymnastics Federation, all attention was compelled on junior team in group exercises which performed with 5 hoops in the morning session. The team consisting of Nilufar Niftaliyeva, Gulsum Shafizada, Sabina Hummatova, Aliaksandra Platonova and Emilya Bagiyeva drew a round of the audience’s applause having perfectly executed their exercise for which they received 15.916 points from the judges.

With this result, the team took over the Championships leadership leaving behind Ukraine, Italy and many other countries. However, then, the team went down to the third place losing to Russia (17.1) and Belarus (16.45). But according to the final protocol, it stopped on the 4th place losing the 3rd one to Bulgaria (16.266).

At the same time, group medalists in the all-around will be defined according to the two days’ total results. So, tomorrow, on June 1, all 24 teams will perform again with 5 hoops and the final result will consist of points received for two exercises. On the same day, the teams qualified for the finals to take place on June 2 will be defined.

We would like to remind that the individual gymnasts Marina Durunda and Lala Yusifova will compete in the evening session. First, they will perform the compositions with a ball and then – with a hoop. The girls will compete for reaching the individual finals and the results of the senior gymnasts will go the total team competition score.