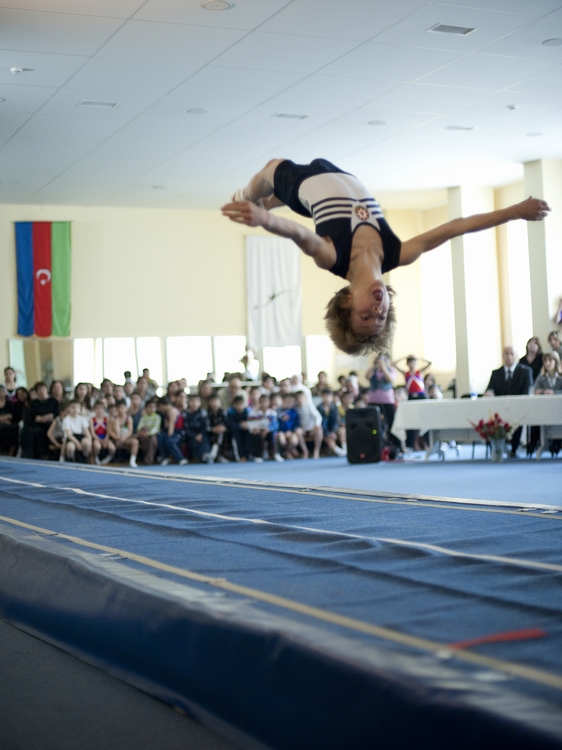 The World Tumbling Age Group competitions held in Birmingham have successfully come to an end for an Azerbaijani gymnast.
According to the press service of Azerbaijan Gymnastics Federation, the 15-year-old jumper from Baku Gymnastics School, Mikhail Malkin, managed to be included into the list of top eight strong gymnasts among 33 competitors for the world awards.
In the qualification, he received 64 points (32.1 – for the somersault exercise and 31.9 – for the twist).
The final jump on the English acrobatic track brought the 7th place to Makin having taking the lead over a gymnast from Portugal. This time, he received 31.7 points from the board of judges losing to three Russian representatives and one tumbler from Denmark, Portugal and Britain.
“The fact that Malkin reaches the final at the World Age Group competitions for the second time is a positive factor in itself. It shows that the sportsman continues to be among the favorites despite a change in the age category. So, I was not surprised when I saw his name in the start list of the final to be held in the evening.” Such a commentary on Malkin’s performance was provided by an Azerbaijani judge of the international category who also judged the women’s performances in tumbling in Birmingham, Adil Huseynzada. It should be mentioned that he works on contract basis in the Republic of South Africa at present.
As to our second jumper making his debut at the world forum with 53.9 points, Aydin Aliyev took the 30th place.
Next week-end (December 2-3), both sportsmen will take part in the Azerbaijan and Baku Championships which is the final tumbling event of the year to be soon over.