Another medal celebration of our trampoline gymnasts 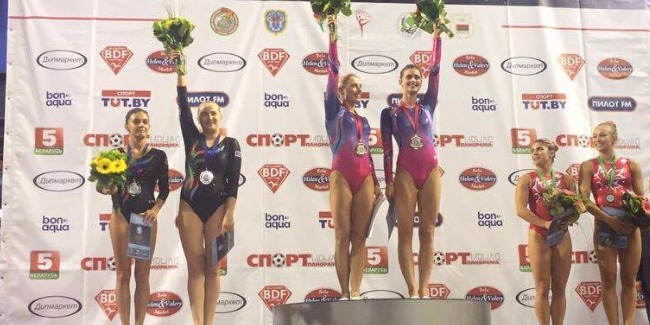 Members of the Azerbaijani Trampoline Gymnastics National Team participated in another international tournament.

Today, the World Cup series have come to an end in Minsk which previously hosted the Open Slavic Games. The excitement and tiredness of the two competitions in a row did not prevent our gymnasts from demonstrating successful performances. Thus, our women’s pair, Sviatlana Makshtarova and Veronika Zemlianaia, having performed their synchronised program accurately, managed to receive high scores from the judges. Our girls were just left behind by the Belarusian team and mounted the second step of the podium. But in an individual program, they failed to reach the final.

Another representatives participating in the synchro program were the men’s pair consisting of Oleg Piunov and Ilya Grishunin. Though our jumpers succeeded to qualify for the final, they contented themselves with the 4th place due to the mistakes made in the decisive stage. Together with Ilya and Oleg, another representative of our National Team, Ruslan Aghamirov, also tried out his strength in the individual program. From our gymnasts, only Ilya participated in the final and took the 7th place.  Oleg and Ruslan ranked 13th and 22nd accordingly.