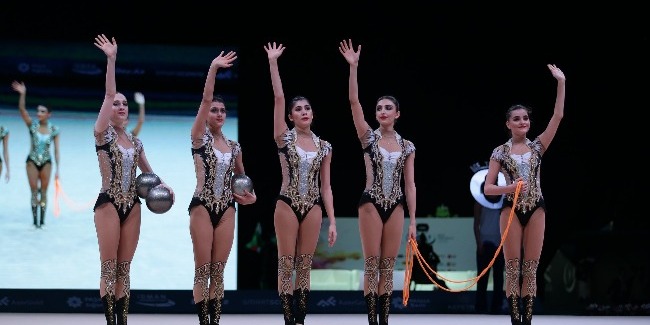 The members of our Rhythmic Gymnastics National Team competed in the World Challenge Cup series held in Spanish Guadalajara last weekend (4-6 May).

Our team in group exercises consisting of Ayshan Bayramova, Siyana Vasileva, Zeynab Hummatova, Diana Doman and Aliya Pashayeva won the Bronze medal for their performance in the final with 3 balls and 2 ropes. Having earned 17.350 points from the judges at the competition between 17 teams, the group was left behind by only the Bulgarian and Italian teams.

In the international tournament held in French Corbeil-Essonnes at the same time with the World Cup, our country was represented by junior rhythmic gymnasts – Darya Sorokina, Arzu Jalilova and Luzan Yelizaveta. The best result among our gymnasts was shown by Arzu. She stopped a step away from the medal and ranked 4th for her performances with clubs and a ribbon.