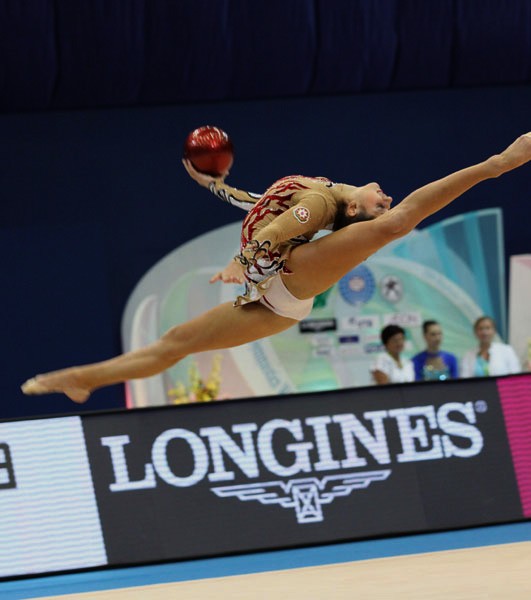 The 29th World Championships in rhythmic gymnastics lasting for a week, has come to the end in the picturesque surroundings Ise of the Japanese Mie prefecture. The organizers of the event, who received high appreciation from the International Gymnastics Federation, got so excited that presented origami and pearl-beads almost to every participant towards the end of the event. The pearl in that places is really natural. In the middle of the past century, Kokichi Mikimoto established an empire on extraction of natural pearl and production of cultivated pearls, which was the pride of the prefecture to this very day.

The last presents of the organizers from the land of the rising sun were intended for the winners in separate finals among the group teams, where Azerbaijani gymnasts, who had historically won the 4th place in the all-around a day ago, took part in. According to the head coach of the country’s national team, Mariana Vasileva, our group team, which reached both finals of the World Championships for the first time, performed with dignity: the gymnasts took the 6th place with 3 ribbons / 2 ropes, and the 7th place with 5 hoops.

“All the 6 gymnasts – Vafa Huseynova, Valeriya Yegay, Dina Gorina, Anastasiya Prasolova, as well as debutants, Jeyla Guliyeva and Stefani Trayanova, earn praise both jointly and individually. We could really become the bronze medalists in one of the performances but… But we have to work further and we are going to do it after a short rest. We will not stop on achieved results; it would have been unreasonable, as the judges, viewers and our rivals will see us in a different light. Is a change in composition possible? For the time being, I can say that I will change music for both exercises. We have to keep up to date. So, the collective will perform with new compositions in the European Championships in Germany in 2010,” Mariana Vasileva stated.

Speaking about the individual gymnasts’ results, the head coach of the national team noted the repetition of bronze success in a team competition, and especially emphasized Aliya Garayeva’s merit. “Her ball presented the first silver medal to Azerbaijan in the World Championships. This medal was won in a very complicated and nervous contest,” she said.

As to the championships’ general results, a 19-year-old queen of the rhythmic gymnastics Evgeniya Kanaeva from Russia became the overall winner. She won 6 gold medals breaking a record of her compatriot Oksana Kostina, who had become 5 time champion in the distant 1992.

In this connection, the title of the photo session, published in a well-known Russian magazine “Echo of the Planet”, is quite appropriate here. The author explicitly suggests: “Specialists assert that a new era – Evgeniya Kanaeva’s era has begun in rhythmic gymnastics. And adherents of all the possible signs saw some special sign in 1 letter-difference between Kanaeva and her predecessor on the gymnastics throne Alina Kabaeva.”

However, Kanaeva and her team mates will defend the title of the strongest gymnasts in the World Championships to be held in Moscow. Its presentation was made in Japan by the executive director of the “Russian Olympians’ Support Foundation” Aleksandr Katushev who made it clear that Moscow was not going to give the hard-won positions away.