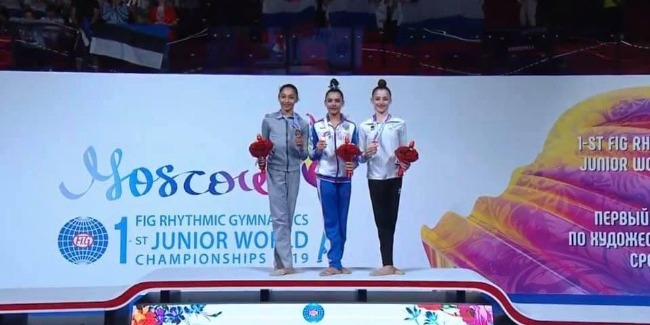 Today, the 1st FIG Rhythmic Gymnastics Junior World Championships has completed its work in the capital city of Russia, Moscow.

The member of the Azerbaijani Rhythmic Gymnastics National Team representing Azerbaijan in the Individual program – Arzu Jalilova –  won 2 medals at the Championships. At first, our junior gymnast became the Bronze medalist (17.400) for her performance with a Rope. Her second final routine was with a Ball. Azerbaijani gymnast, having demonstrated more successful performance in this program, was awarded with “Silver” (19.200).

Another Azerbaijani individual gymnast, Narmina Samadova also executed 2 final performances on the Floor today.  She ranked 7th for her clubs routine (16.700) while her performance with a ribbon enabled her to become 5th (15.825).

Azerbaijani junior gymnasts in group exercises consisting of Farida Safiyarzada, Seljan Hajizada, Laman Alimuradova, Milana Akbarova and Madina Asadova were among the finalists for their 5 hoops` routine. The final performances of our team in group exercises was evaluated with 19.950 points and they completed the Championships at 7th place.