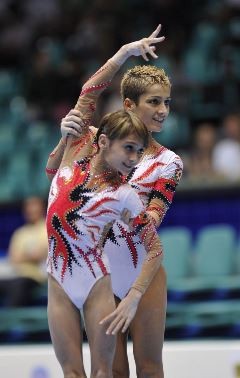 Ayla Ahmadova hasn't been in Levallois long, but the FIG Athlete Representative for Acrobatic Gymnastics has already been struck by the beauty in the Paris suburb, even if she's hardly left the Marcel Cerdan Sports Palace.

The beauty Ahmadova sees is not in the Eiffel Tower or Arc de Triomphe (not yet, anyway -- she hopes to get to some of the famous sights before leaving), but in the Acrobatics she's been watching during podium training and last week's World Age Group Competitions.

"Honestly, what I see now is much better than when I was competing," said Ahmadova, who competed with partner Dilara Sultanova at the 2008 and 2010 World Acro Championships and 2009 World Games. "Now, the artistry is more beautiful. When I watched the Age Group Competitions, I was surprised. Just in the four years since I retired, there has been a big improvement."

Ahmadova and Sultanova's best results came at the 2009 European Championships, where they had the top score for their Dynamic Routine and second highest in Balance, which helped them win the overall bronze medal. ("I remember it like it was today," Ahmadova recalls fondly.) She retired in 2010.

Ahmadova's sense of artistry has been sharpened in her new job with Cirque du Soleil, where she is part of a Trio in the show "Varekai." At Acro Worlds, she is taking on another new function, acting as the liasion between the athletes and the FIG Acro Technical Committee.

"We had a meeting a few days ago," she said. "There was not enough time to talk about everything, but it was nice to see the athletes and talk to them."

Gymnastics is growing in Ahmadova's country, which has recently bolstered its teams with athletes from other countries who have taken Azeri nationality to compete for the former Soviet Republic.

Azerbaijan is represented in Levallois by Trio Lala Huseynova, Aynur Huseynova and Narmin Ramazanova, who are hoping to finish in the top 10, which would qualify them to next year's European Games, to be held in Azeri capital Baku. Only Mixed Pairs and Trio will be contested there, but Ahmadova has high hopes for the discipline in her country.

"Rhythmic gymnastics is famous in my country, but Acro, we are working to make it famous," she said. "We are trying everything."

The World Acrobatic Gymnastics Championships get underway Thurday in Levallois with qualifications in all categories. For more, please check out the competition microsite here.