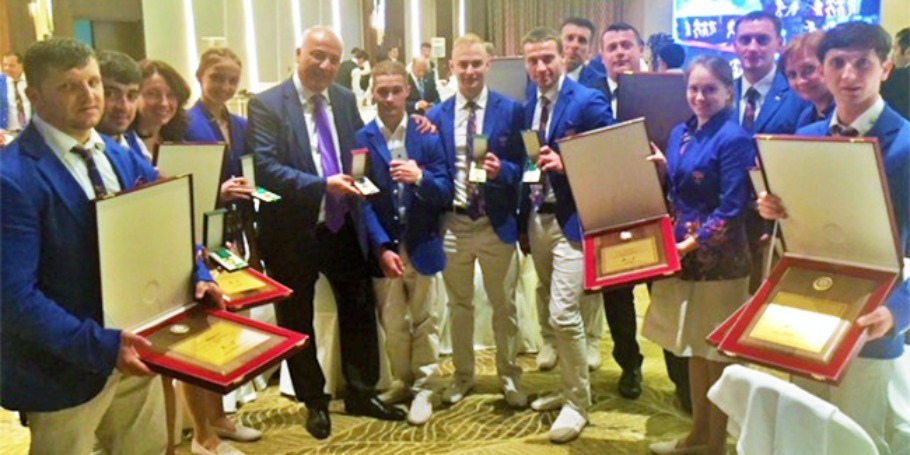 Today, Azerbaijani athletes, showed high results at the 1st European Games, which came to an end in Baku a day before, have been at a reception given by President of the Republic of Azerbaijan Ilham Aliyev and First Lady Mehriban Aliyeva.

According to the results of the Euro-Games, an awarding ceremony took place within the framework of the reception.

At the ceremony, there was read a decree of President Ilham Aliyev on awarding the Chairman of the Organizing Committee of the 1st European Games, President of Azerbaijan Gymnastics Federation Mehriban Aliyeva with “Heydar Aliyev” order for a productive activity in development of culture, education, public health and sports in Azerbaijan, a broad propaganda of the Azerbaijani people’s cultural heritage on an international scale and great services in organization of the European Games.

Vice-President of Azerbaijan Gymnastics Federation, Altay Hasanov, was awarded with an order of “Fame” of the Republic of Azerbaijan by President Ilham Aliyev, according to the results achieved at gymnastics disciplines competitions of the Euro-Games, as well as for contribution in development of gymnastics in the country.

The five-time medalist of the Euro-Games, an artistic gymnast Oleg Stepko was also honored with the order of “Fame” from the President’s hands. It should be noted that Oleg is the only sportsman who won 5 medals (1 “gold”, 2 “silver”, 2 “bronze”) at the events of the 1st European Games.

Oleg’s team-mates, Eldar Safarov and Petro Pakhnyuk who took the “bronze” with joint efforts in a team competition, as well as the holder of the medal of the same value, a trampoline gymnast Ilya Grishunin and the silver medalist, an elegant representative of rhythmic gymnastics Marina Durunda were awarded with a medal of “Progress” of the country by Azerbaijan President.

An emphasis was placed on their coaches as well. Thus, Honorary Diploma of the President of the Republic of Azerbaijan was presented to coaches – Mariana Vasileva, Natalya Bulanova, Anastasiya Prasolova, Kamil Guliyev, Danail Sheytanov, Pavlo Netreba, Rza Aliyev and Uladzimir Shulikin.

Taking an opportunity, we, once again, congratulate the whole sports community of Azerbaijan on such high achievements and express our deepest gratitude to President of our country Ilham Aliyev for constant attention and care, the successful results of which we witness today.