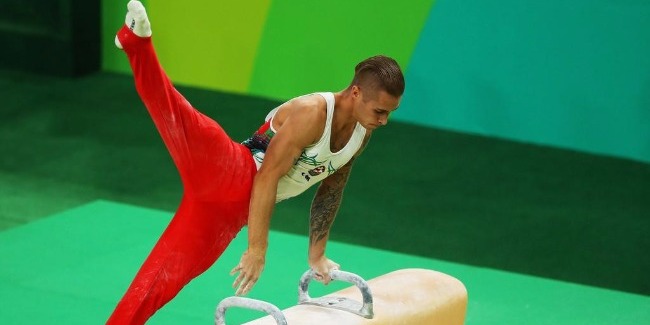 On August 6, there were held qualifications in Men’s Artistic Gymnastics within the framework of the Olympic Games in Rio de Janeiro.

For the first time in history of Azerbaijani Men’s Artistic Gymnastics, the country was represented at the Olympiad by 2 gymnasts – Oleg Stepko and Petro Pakhnyuk.

According to the qualification results, unfortunately, Oleq Stepko failed to reach the final on his favorite apparatus – Parallel Bars, which brought him 2 medals at the last year’s major competitions (“gold” – the European Games, “bronze” – the World Championships).

In total of 6 routines executed in the qualification, Oleg found himself in the list of All-Around finalists having received 86,208 points. Azerbaijan will be represented among the best 24 athletes to compete in the All-Around Final of the Olympic Games on August 10 for the first time in history of National Men’s Artistic Gymnastics.

Another gymnast Petro Pakhnyuk, who took part in such a major event for the first time, completed his performances, having stopped at 34th position among 49 gymnasts in the All-Around Qualification.