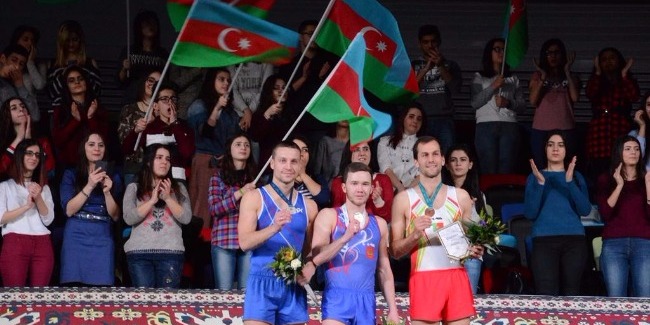 The first FIG Trampoline Gymnastics World Cup in the new Olympic Cycle has come to an end. 82 Trampoline and Tumbling gymnasts, gathered in our capital from 15 countries, entered into strong contest for the medals on the basis of the new Code of Points came into force from 2017 at Milli Gimnastika Arenası (MGA, National Gymnastics Arena) within two-days.

Having demonstrated real persistence, Azerbaijani representatives succeeded to finalize the tournament with 3 silver medals. Our Tumbling gymnast Mikhail Malkin, who participated in this kind of events for the first time, was the first to win the World Cup’s silver medal. Afterwards, having performed within women’s Synchro Pair at the Trampoline events, our jumpers Sviatlana Makshtarova and Veronika Zemlianaia won another “silver” of the tournament. Of course, Ilya Grishunin, was honoured with the most precious prize of the finals having justified the hopes struggling till the end. He mounted the second step of the podium for his individual performance, which is Olympic discipline.

The organizers of the World Cup in Trampoline Gymnastics, held in our country for the second time, and, in Tumbling, hosted by Azerbaijan for the first time, managed to win the hearts of both spectators and event participants with a number of new organizational introductions again. The hall was plunged into darkness in this kind of competitions for the first time. The light directed on the apparatus, where the performances were demonstrated, has created an enchanting sight. At the finals, sounding of music of countries represented by each athlete while announcing their names, reduced the competitions’ strain in the final stage and cheered them up. Amusing footages shown on the big screen, which completed the magnificence of the hall, bestowed interesting moments to the spectators, gathered on the stands.

The support of the audience and the “Fan club” of Azerbaijan Gymnastics Federation (AGF), accompanied with applause, both for national athletes and foreign gymnasts, during the event, has inspired the gymnasts and encouraged them to perform more confidently.

So, the first World Cup in Trampoline Gymnastics hosted by AGF in the new Olympic cycle has successfully come to an end.

On this occasion, we congratulate the whole gymnastics community!