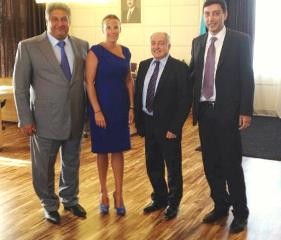 During this highest level meeting, in which also the UEG Director Mrs Kirsi Erofejeff-Engman (FIN) participated, the Minister commented the development programme of sports and the calendar of the sports events, Azerbaijan wishes to host and organise each year until 2020. One of the first ones will be the 2014 European Rhythmic Gymnastics Championships.

The organisers of the visit of the UEG delegation in Azerbaijan, the Secretary General of the National Gymnastics Federation, Mr Fahrid Gaybov, and the International Relations delegate, Mr Mehman Aliyev who is also member of the Disciplinary Commission of the International Federation of Gymnastics (FIG) were very pleased with this news.

As a matter of fact, gymnastics is very popular in the entire country and enjoys a tremendous development; it increases its international reputation step by step. The individual gymnasts and the national group are among the best worldwide. This was proven once again at the last World Championships in Kiev, which ended on September 1st, 2013, thanks to Lala Yusifova and Marina Durunda, who ended on the 13th, respectively 16th rank in the individual all-around final and the group, that achieved the 7th rank in the all-around group final.

The 2014 European Championships will be held in a new hall, the construction of which is nearly finished. This hall will be exclusively used for gymnastics and all its disciplines! A first in Europe! This hall offers enough seats for 9'000 spectators and will be inaugurated beginning of 2014 by the President of the Gymnastics Federation of Azerbaijan, Mrs Mehriban Alieva, wife of the President of the Republic of Azerbaijan. President Guelzec is very pleased with these development perspectives, which will certainly have an influence on the 48 UEG member federations. In the name of the UEG, he expressed his gratitude to the Authorities of Azerbaijan and thanked the national federation for its dynamism.

In 2015, Baku will be the capital of European sports. The city will be host of thousands of athletes, participating in the very first European Games. Gymnastics will of course be part of this event. « We will present our Olympic disciplines - artistic, rhythmic and trampoline gymnastics - and have solicited the honour of presenting aerobic and acrobatic gymnastics as well as a final Gala. I am looking forward to present our sport in all its diversity!" said President Guelzec during the meeting with the organisers.

The trip to Baku, organised from August 25th to 29th, allowed the UEG, its President and its Director to measure the impact of gymnastics on the development of sports in general in a country, where the political willpower is expressed today by the realisation of its projects.