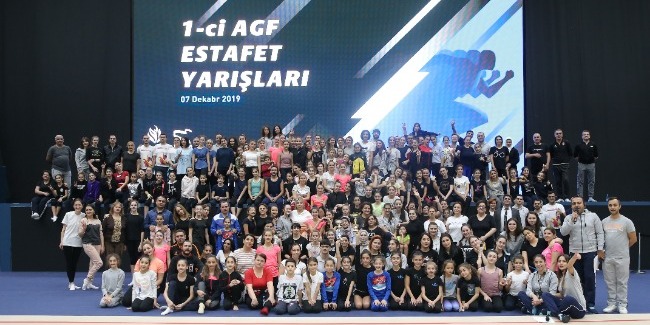 The members of the National Teams in gymnastics disciplines, their parents as well as some coaches participated in this event organized by Azerbaijan Gymnastics Federation for the first time.

Each of 5 games, which was prepared for the competitors, consisted of 3 stages. At the end of the very interesting and amusing relay, the winner became “Karabakh”. The teams of “Gulustan” and “Babak” ranked 2nd and 3rd accordingly. The cups were presented to the prize-winners.

The purpose of holding of this event was improvement physical training of the competitors by developing a collective spirit between the athletes and their parents, the coaches and the spectators, as well as showing that gymnastics is for everyone, but not just for athletes.

“This is very interesting competition, because not only athletes but also their parents and coaches participate in relay. There was no age limit among the participants of the relay race, and even the grandmother of the gymnast, Narmina Samadova, attended the event. Gymnastics is a sport discipline that everyone can do”, said  Head Coach of the Azerbaijani Rhythmic Gymnastics National Team and initiator of the relay, Mariana Vasileva.

According to M.Vasileva, the purpose of the relay is the unity of the whole collective - gymnasts, their parents and coaches:

“Sometimes, it seems like athletes` job is easy, because the spectators see only final performances. But, of course, parents know how many efforts their children give for the training process. The competition level of relay is achievable for everyone. While preparing the team for relay, I felt that every participant wished to win. Everyone feels the spirit of gymnastics dominating at Milli Gimnastika Arenasi”.

At the end of the race, Narmina Samadova, a member of the Rhythmic Gymnastics National Team and her grandmother, Aziza Samadova, said that these competitions gave to all the participants a very cheerful and positive emotions. “Relay is a significant event. I liked it very much, I felt myself young again. I hope holding relay races will turn out to be a tradition. There are only good impressions and I think, if the relay races will take place again, I will always attend”, Aziza Samadova said.

It should be mentioned that this relay also aims to promote a spirit of solidarity and is dedicated to the forthcoming December 31 - World Azerbaijanis` Solidarity Day.