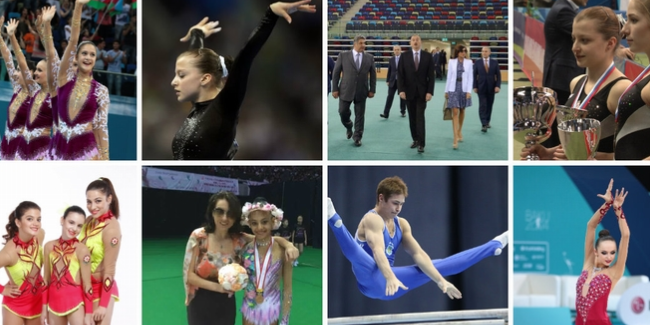 The outgoing year was successful for Azerbaijan Gymnastics Federation. It began with the organization of the judging courses on recently opened gymnastics disciplines - trampoline and women's artistic gymnastics. Following the results of the courses, we now have the judges on these gymnastic disciplines. A little later, our representatives have successfully passed exams after courses on aerobics (a new discipline for us as well) organized in Austria and become judges. Then, the Academy of International Gymnastics Federation (FIG) for coaches in rhythmic gymnastics was established in Baku.

President of the country Ilham Aliyev and his spouse, President of Azerbaijan Gymnastics Federation Mehriban Aliyeva have attended the opening of the National Gymnastic Arena, which has no equal in the world, and this became the event of the year. This unique arena has all the conditions not only for the training of our athletes, but also for local and international competitions in all six gymnastic disciplines. It not coincidentally gymnasts from different continents come here to participate in the training camps. Following the test Azerbaijani Championship in rhythmic gymnastics, European Championship in this sport was held there and received the highest score from experts and management of the European Gymnastics Union.

This year, the gymnasts continued to delight us with their medals. In some cases, they won medals in those disciplines and programs, in which they still have not managed to gain success. Thus, in rhythmic gymnastics our juniors took the first medal (bronze) in the team competition at the European Championships. Senior gymnasts have not conceded. Our team in the group exercises for the first time rose to the podium at the European Championships, winning a silver medal in the exercise with 3 balls and 2 ribbons.

Anna Pavlova who ranked the second (vault) at the European Championships brought the very first Azerbaijani medal in the women’s artistic gymnastics. She also won the first medal at the World Cup. She won an exercise on the uneven bars at the competition held in the capital of Slovenia.

At the World Cup Oleg Stepko brought the first medal in men’s artistic gymnastics. He ranked the third in the exercise on the parallel bars in the competitions held in the Croatian Osijek.

Our aerobics team, in turn, distinguished rising at the podium for the first time (bronze) at the World Cup held in the Bulgarian city of Borovets.

Oleg Piunov and Ilya Grishunin ranked the third in Portugal, winning the first medal at the World Cup on Trampoline.

Overall, in 2014 our athletes won 114 medals including 42 gold, 30 silver and 42 bronze. Most of them (68) falls on rhythmic gymnastics. In the past year, our country's flag was raised most of all in the honor of Zhala Piriyeva and Marina Durunda. The latter, who won the most of the gold medals, was chosen sports ambassador of the European Games. In the ranking of Azerbaijan Gymnastics Federation, the first place was taken by the senior group team, which also finished 2014 at the third place in the ranking of group teams by the International Gymnastics Federation (all around).

In the New Year, we have the European Games, on which gymnastics will be presented by the six disciplines, European and World Championships and other events. We wish our athletes victories and new achievements!