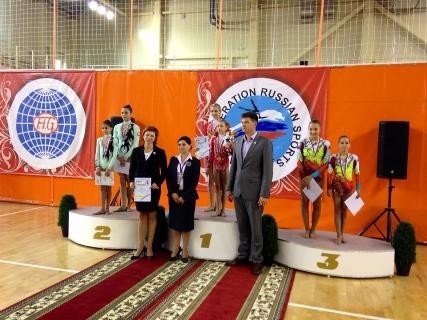 According to the press-service of Azerbaijan Gymnastics Federation, the "silver" was won by women’s pair Lala Huseynova – Khoshgadam Guliyeva. After execution of the first two exercises – balance and dynamic, our duet held itself with confidence in the leading top three of the qualification ranking. And in the final of the combined exercises Lala and Khoshgadam became the second having lost only to the floor’s hostesses.

Men’s duet consisting of Elchin Alibayov and Emin Gulmammadli showed the third result at the competition.

In any case, the tournament in Russia was considered by the coaching staff as a test on the threshold of the European Championships and continental competitions of age groups which to be held in Portugal in October.

Meanwhile, there has taken place a debut of Azerbaijan at the competitions in another gymnastics discipline – a trampoline on the Pyrenees.

An Azerbaijani gymnast Ruslan Aghamirov, who appeared on the international floor for the first time, did not have success in every element as internal stress and lack of experience had an impact on his performances. However, the 42nd place won at the first World Cup series should create incentives for more concentrated work on execution of elements. And the next World Cup is not far off. This weekend, neighboring Spain will host the flying gymnasts in another event.