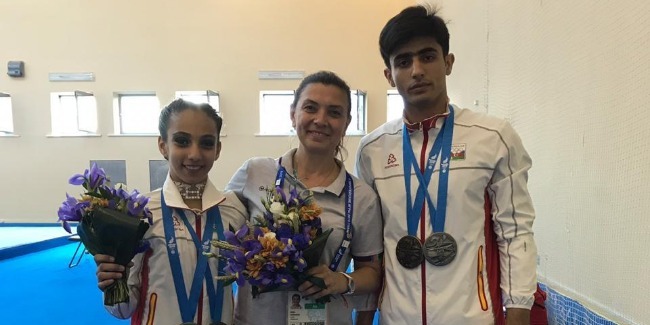 Today, the gymnastics events have commenced in the capital city of Belarus (Minsk) within the framework of the 2nd European Games.

The members of our Acrobatic Gymnastics National Team, Ruhidil Gurbanli and Abdulla Al-Mashaykhi representing Azerbaijan within Mixed Pair, successfully executed the dynamic exercises and won the Silver medal of the Games. Their performance was scored 28.830 points by the judges and they brought the first medal to Azerbaijani team`s medal box.

Another medal thrill of Azerbaijani Mixed Pair was in balance routine. Our gymnasts became the Bronze medalists having received 28.160 points.

It should be mentioned that along with Acrobatic gymnastics, there were held competitions in Rhythmic gymnastics as well.  Zohra Aghamirova representing our country in Individual program, ranked 8th  in the All-Around, having received 72.400 points from the judges.

Tomorrow, Azerbaijani Rhythmic gymnasts in group exercises will join the competition at the 2nd European Games, while the acrobats will test their strength in combined exercises.