AZERBAIJANI ACROBATS WIN THE SECOND PLACE AT THE WORLD GAMES! 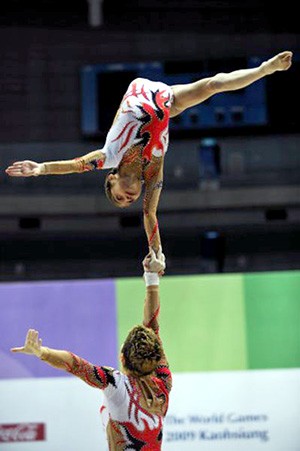 An Azerbaijani national team filled up its medal box having won the second medal at the World Games being held in Kaohsiung (Taiwan).

Our acrobats - women’s pair consisting of Ayla Ahmadoava / Dilara Sultanova became the main heroes by winning silver medals in the final of a mixed exercise.

They were the fourth in the qualification of a balance exercise (28.457), and were the first in a tempo exercise having received the highest point - 28.5.

The total result enabled Ayla and Dilara to take part in the final where they competed for the “Games’ gold”. But as result, they took the second place, losing just 0.1 points to the Belgian pair – Tatyana de Vos / Florence Henrist! The third place was taken by a pair from Great Britain, and they also managed to take the lead over their strong rivals, including present champions of the World Katerina Murashko / Alina Yushko from Belarus.

This is a splendid result, especially, if to take into account that the planet’s strongest sportswomen have gathered for participation at the World Games. Our sportswomen deserve praise and this has been their best result achieved so far.

While on the subject of our acrobats’ success, we have to mention the work carried out by their coach Irada Gurbanova. Under her leadership, Ayla and Dilara have achieved an appreciable progress recently.

Thus, the Azerbaijani national team is quite fruitfully performing at the Games, having two medals won. It should be mentioned that the first medal was won by a gymnast Aliya Garayeva who became a bronze medalist in the final with a ribbon. And if to take into account that the country is represented only in three sports disciplines in the competition (rhythmic gymnastics, acrobatic gymnastics and karate), the team, for the time being, is demonstrating hundred-percent result.

Thus, Azerbaijan takes the 23rd place in the total reckoning of the World Games taking the lead over many other countries.

Moreover, thanks to Ayla Ahmadova and Dilara Sultanova’s silver medals, as well as Aliya Garayeva’s bronze medal, Azerbaijan takes the 6th place among countries taking part in the tournaments in gymnastics disciplines.