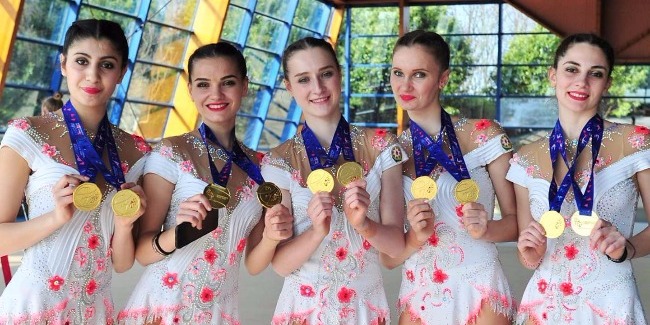 Last weekend, the main composition of our National Team in Rhythmic Gymnastics took part in the first major competition of the new Olympic cycle.

Marina Durunda, as well as our team in group exercises consisting of Ayshan Bayramova, Siyana Vasileva, Diana Doman, Aliaksandra Platonova and Elif Zeynep Celep set out for French Thiais to represent Azerbaijan at the traditional Grand Prix, held on March 25 and 26.

Having participated in the all-around on the first day of the tournament, our group was just few points behind of the Italian team – the latest World Champion (with 5 ribbons) and took the 2nd place. However, our girls did not content themselves with it. Being remembered with their brilliant performances on the last day of the tournament, they won the gold medal in both finals.

Unfortunately, leader of our team Marina Durunda sustained an injury a day before the start of the tournament and could not perform in the competitions. The time when she resumes her trainings will be known after the results of medical examinations in Baku.

The next competition for our team in group exercises will be the World Cup in Italian Pesaro city to be held in the first week of April.