AZERBAIJANI COACHES BECOME JUDGES OF THE INTERNATIONAL LEVEL IN TRAMPOLINE 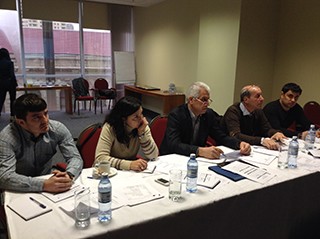 Three of Azerbaijani specialists have become judges of the international category in jumps on the trampoline.

This decision was made according to the results of the Judges' Courses held in Baku in early January with a participation of the Technical Committee Member in trampoline of the International Federation of Gymnastics (FIG), Dmitri Poliaroush.

According to the press service of Azerbaijan Gymnastics Federation, having successfully taken the course and passed 3 examinations, Abdulla Gasimov, Rahib Aliyev and Adil Huseyn-zada from Baku Gymnastics School, obtained Brevet 4. It should be mentioned that the latter one is also a holder of the FIG Brevet 4 in tumbling.

They already can take part in the World Cup series to be held in Switzerland, Belarus and Portugal this summer and fall. And near-term perspective - is the European Championships at the same Pyrenees in early April.

Trampoline gymnastics is new sports discipline started to be developed by Azerbaijan Gymnastics Federation last year. A member of the country's national team Ruslan Aghamirov performed at the World Championships and in a number of World Cup series as well as took the second place at the international event in Belarus.