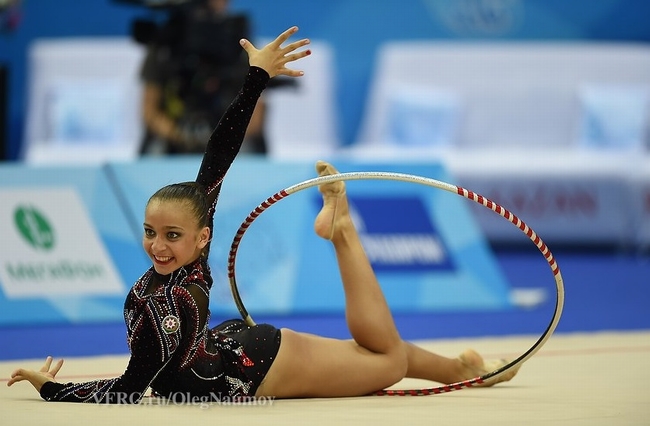 2014 Rhythmic Gymnastics World Cup Final wrapped up this weekend in Kazan. The event brought together more than 130 athletes from 27 countries, including representatives of our team - Ayshan Bayramova and Nilufar Niftaliyeva.

“I am very pleased with the performance of the girls, because for Aisha's it is first World Cup, and for Nilufar - a serious start after a long break,” the head coach Mariana Vasileva said after the competition. “Gymnasts showed exactly what they can do at the moment. Sure, they were a little excited and therefore made some minor bugs. However, this can be corrected.”

As a part of our team, Nilufar will represent the country at the upcoming World Championships to be held in Izmir by the end of this month. The preliminary squad for the championships, which will be held on September 21-28, includes nine athletes. Among them are the absolute champion of the country and a multiple prizewinner of the World Cup Marina Durunda, Gulsum Shafizada and Nilufar Niftaliyeva, as well as group exercises team represented by Sabina Abbasova, Siyana Vasileva, Aynur Mustafaeva, Aliya Pashayeva, Diana Doman and Aleksandra Platonova.

“Marina Durunda and Gulsum Shafizada will perform with ball, hoop, ribbon and clubs. Nilufar will do the same exercises with a hoop and a ball,” Vasileva said.