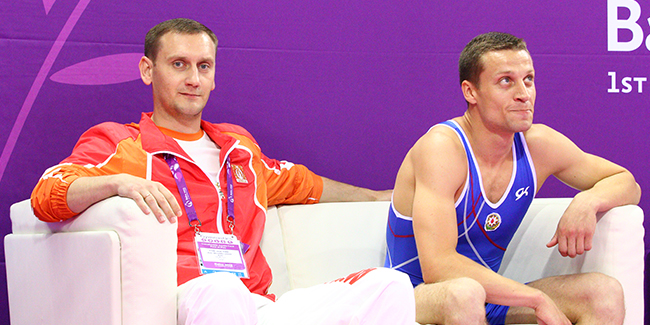 Today, there have been finished qualifications in the individual program in Trampoline Gymnastics as well as among mixed pairs in Aerobic Gymnastics at Milli Gimnastika Arenası (National Gymnastics Arena) within the framework of the 1st European Games.

At Trampoline Gymnastics Men’s events, Azerbaijan was represented by Oleg Piunov and Ilya Grishunin, and, by Sviatlana Makstarova and Sabina Zaitseva in women’s events. According to the regulations of the competition, 6 athletes, showed the best results, qualify for the finals. Besides, in the final, each country can be represented only by one gymnast. According to the results of two routines in voluntary and special required program, having received 104.640 points, I. Grishunin ranked the 5th. Among women athletes, S. Makstarova took the 4th place in the qualification with 100.370 points. So, both athletes will perform in the finals to take place on June 21.

Unfortunately, our mixed pair in Aerobic Gymnastics did not succeed to be among the finalists. It should be reminded that this gymnastics discipline started to be developed in Azerbaijan in 2014.