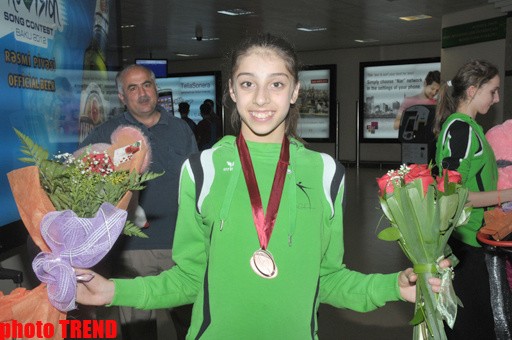 According to Trend News Agency, it was stated to the journalists by the Azerbaijani rhythmic gymnastics national team’s head coach, Mariana Vasileva, when they came back from the European Championships on Monday.

She also noted that the Azerbaijani national team’s leader, Aliya Garayeva, won the third place in the all-around at the European Rhythmic Gymnastics Championships held in Nizhny Novgorod.

A junior gymnast Gulsum Shafizada, who won the third place, said she had been dreaming to perform with dignity at the decisive event and raise a flag of Azerbaijan.

“I cannot sill believe I am the European Championships’ bronze medalist,” she said.

“It was a difficult championship but we tried to perform at the highest level,” another gymnast Nilufar Niftaliyeva, who also thanked her coaches and the Federation,” said.