AZERBAIJANI GYMNASTS WIN 12 MEDALS IN THE TOURNAMENT IN HUNGARY 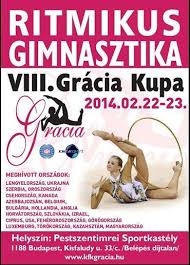 As it was emphasized by the press service of the National Federation, the team's leader Marina Durunda turned out to be in the saddle again having won all 5 medals included into the competition program. This is a phenomenal success considering that Durunda mounted the podium in Tartu three times at most.

The country`s group team has also won two first places from three possible ones. At first Sabina Abbasova, Aliya Pashayeva, Siyana Vasileva, Aliaksandra Platonova, Diana Doman and Aynur Mustafayeva braided a cobweb in an exercise with 3 balls and 2 ribbons in such a way that they turned everybody's head with a throw of 10 clubs! And only in the all-around, having become a little bit passive, the girls gave a chance to their rivals to take one-place lead over them and ranked the second as a result.

And, now, let us talk about competition among juniors in Budapest, who compete for greatest number of sets of medals most of all - even 5 - at the forthcoming European Championships to be held in Baku on June 13-15 . A 14-year-old gymnast Zhala Piriyeva from Baku has become a winner in an exercise with a hoop and a ball, Beyza Demir (born in 1999) has contented herself with the “bronze” in an exercise with a ribbon. And the Azerbaijani junior sportswomen took the second place in the team competition.

According to the national team's head coach, Mariana Vasileva, her gymnasts will not rest on their laurels for a long time, as this year's first tournament from Grand Prix series is starting in Moscow this week. Marina Durunda (Grand Prix), senior group team (international tournament), Beyza Demir and the country`s junior group team consisting of Emilya Bagiyeva, Sabina Hummatova, Jannat Mammadova, Zeynab Hummatova and Sabina Alizada (qualification for the Youth Olympic Games) will perform in the capital of Russia.