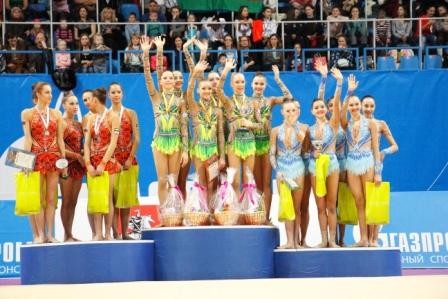 International competitions among group teams have come to an end within the framework of the first Grand Prix series held in Moscow “Drujba” Sports Complex.

According to the press service of Azerbaijan Gymnastics Federation, the national team created a furor by winning two medals within one day. The performance of Azerbaijani gymnasts with 3 balls and 2 ribbons to ever-living Muslim Magomayev`s composition called "Azure Eternity" was so elegant and sincere that the judges could not refuse deserved points to Sabina Abbasova, Aliya Pashayeva, Siyana Vasileva, Diana Doman, Aliaksandra Platonova and Aynur Mustafayeva. As a result, our gymnasts achieved high points (16.95) and won the "silver".

In the final of the group exercises with 10 clubs, the Azerbaijani team was awarded with the bronze medal. Russia took the first place and Bulgarian gymnasts became the second.

By mounting the podium, the girls have made a unique present to one of the team members namely to Siyana, who is turning 18 today. After celebrating the birthday in Baku, the girls, as well as an individual gymnast Gulsum Shafizada, will set out for France in a few days where another Grand Prix series to be held in the city of Thiais.