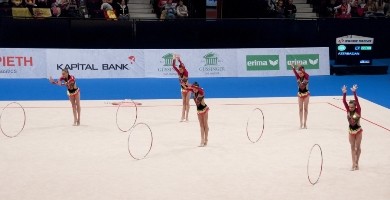 According to azerisport.com, all attention of the morning program was compelled on the junior team in group exercises, consisting of Nilufar Niftaliyeva, Gulsum Shafizada, Sabina Hummatova, Aliaksandra Platonova, Emilya Bagiyeva and Aynur Mustafayeva who competed in the final with five hoops. Our team performed it`s exercise perfectly and received quite high points from the judges - 16.550. This result enabled them to win the silver medals.

Then, it was Lala Yusifova`s turn, who tried her luck with clubs. The gymnast performed her exercise splendidly having received 17.350 points from the judges and became the 7th. Finally, Marina Durunda completed the Championships in the final with a ribbon. She received 17.766 points for her exercise having taken the 5th place.

As to the winners of the finals with separate apparatus, they were Russians - Daria Svatkovskaya (a hoop), Yana Kudryavtseva (a ball,clubs), Margarita Mamun (a ribbon).