Azerbaijani gymnasts win the gold and silver medals in Kazakhstan 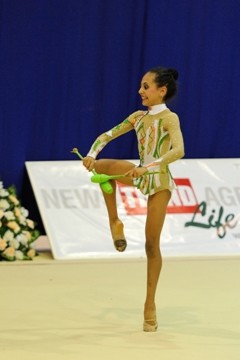 According to the press service of Azerbaijan Gymnastics Federation, the 13-year-old gymnast`s victory over the gymnasts of the same age representing many other countries, became apparent after the execution of the first exercises.

Zhala`s teammate Zuleykha Ismayilova tried to impose a contest on her but she received only a prize for "The will to win."

The flag of Azerbaijan was directed towards the dome of the sports complex in honor of Veronika Omarova (born in 1999) for the second time. She needed only a few tenths of points to take the lead over a Russian Yuliya Bravikova. As a result, the 14-year-old gymnast contented herself with the "silver" of Shymkent.

Another international tournament took place in the capital of Kazakhstan with the participation of young athletes’ quartet from "Baku" club. The only medal was brought to the club’s medal box by Rahima Aslanli (born in 2005) who shared the second place with the Russian athlete. Jamila Ibrahimova (2006) stopped a step away from the podium, Narmina Samadova (2004) became the 5th and Gunel Manafli (2002) closed the top ten.