Azerbaijan’s Acrobatic stars endeavor to dazzle the world in Baku 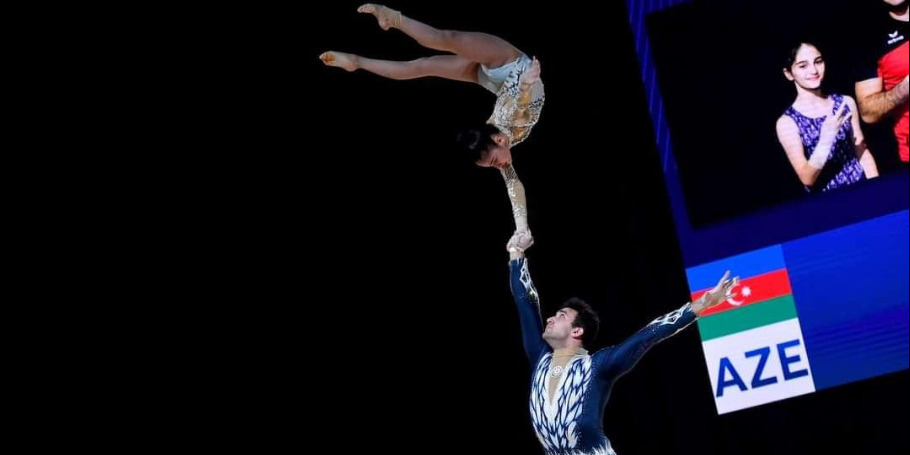 The Press Service of the International Gymnastics Federation (FIG) published an article about the Silver and the Bronze medalists of the European Championships among seniors - Aghasif Rahimov and Raziya Seyidli, who will represent our country at the 28th FIG Acrobatic Gymnastics World Championships in Baku on March 10-13.
We present the article to the attention of our readers.

At the Acrobatic World Championships in their backyard, Mixed Pair Raziya Seyidli and Aghasif Rahimov (AZE) are ready to dance into the limelight.
Looking at the ground from a distance of about three times her height, Raziya Seyidli (AZE) mainly remembers how she was not scared.
She had not intended to be the center of attention at the gym. Her mother had brought her younger brother Rasul to Gymnastics, thinking he might be fit for the sport.
Yet the coach fixed on Raziya too. She had the right physical qualities to be a gymnast, her mother was told. As a test, she was lifted high into the air. She blinked but betrayed no fear. Both Seyidli children were accepted into the Acrobatic section of the gym shortly after.
Aghasif Rahimov was chosen too — but for Tumbling, not Acrobatic Gymnastics. When his progress waned after several years, however, his coach reassessed his abilities and suggested Rahimov, then 16, try something else.
“My body was not able to adapt to Tumbling,” he recalled. “In 2014, the national team coach recommended me for Acrobatic. I tried it and succeeded. After winning my first international competition, my interest for this discipline naturally increased even more.”
Seyidli and Rahimov are among six Azerbaijani medal hopefuls at this week’s Acrobatic Gymnastics World Championships in Baku (AZE). Already Mixed Pair partners for three years, they have been impatiently awaiting a grand opportunity to show the world what they’re capable of.
Thirteenth at the 2021 World Championships in Geneva (SUI) last July, they displayed stunning improvement at the European Championships two months later, winning the silver medal in the All-Around and a bronze for their Dynamic exercise against many of the same Mixed Pairs they faced in Switzerland.
“The main secret of our success is intensive, stable training and hard work,” Rahimov said. “I think we match each other as a sports pair. The main wisdom we gained is that we trust and understand each other.”
For the World Championships, they have upped the difficulty ante, performing Balance elements with one hand instead of two, part of a bid to reach the World podium for the first time.
Doing so at an Acrobatic World Championship in their home country would be an extra bonus.
“At present, the popularity of this discipline has increased in our country. Certainly, the results that we have achieved in the competitions also have had some impact on it,” Rahimov said.
When he finishes his professional sports career, the 24-year-old hopes to coach and open a fitness center. Seyidli, 18, has not thought that far yet.
“I still wish to achieve great success as a gymnast,” she said.