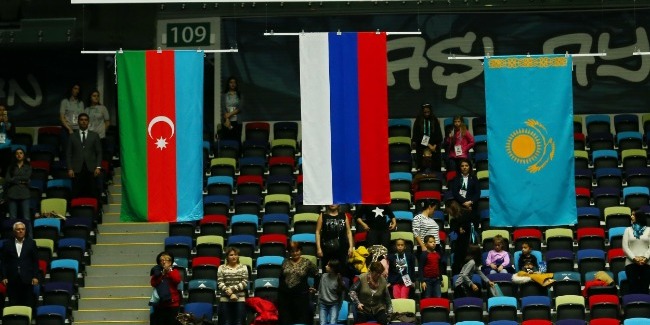 Today, the last international tournament of the season - the FIG Acrobatic Gymnastics World Cup, has completed its work.

Our federation, continuously hosting international tournaments in various gymnastics disciplines, this year, gathered the acrobats in our capital city for the first time.

The first day of the competitions commenced with the qualifications. Afterwards, the official Opening Ceremony took place. Following the splendid presentation of flags of participating countries, Deputy Minister of Youth and Sport of the Republic of Azerbaijan - Ismayil Ismayilov spoke about special attention and care shown to sport in our country and emphasized the high-level organization of gymnastics competitions in his opening speech. After the end of the official part, there was followed an opening show.

This time, compositions demonstrated at the opening show were dedicated to the dances of Azerbaijan. The National Team`s gymnasts, coaches and choreographers in gymnastics disciplines participated in the show, called “My countries` dances”. The performances directed to the popularization of our national traditions and fascinating musical culture, were highly appreciated by everyone.

On the last day of the events, our National Team members, having successfully executed their routines, ranked among the medalists. Today, our Men`s Pair - Seymur Jafarov & Murad Akparov, and our Mixed Pair – Abdulla Al-Mashaykhi & Ruhidil Gurbanli have made some kind of a report of their preparation trainings started several months prior to the events by winning the Silver medal.

The Azerbaijani spectators who did not miss the chance of watching the excellent performances of World and European Champions, greatly supported both national and foreign gymnasts during the 2-day events.