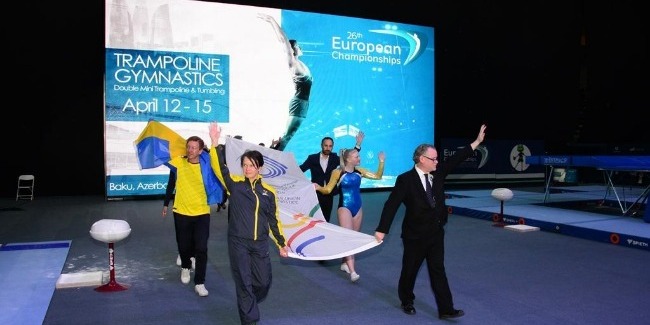 The closing ceremony of the 26th European Championships in Trampoline, Tumbling and Double Mini-Trampoline was held in Baku April 15.

The ceremony of handing over the flag of the European trampoline championship was held as part of the event.The delegation of Azerbaijan Gymnastics Federation, consisting of AGF Secretary General Nurlana Mammadzadeh, Azerbaijan's trampoline team coach Vladimir Shulikin, gymnast Ruslan Agamirov,  the judge Kamil Guliyev, as well as representing the supporting team AGF Elshad Narimanov and on behalf of volunteers Gular Buludkhanli handed over the flag of the European Championship to UEG President Farid Gayibov.

Farid Gayibov, taking the flag, handed it over to the delegation of the Swedish Gymnastics Federation, which will organize the next European Championships in Trampoline (individual and synchronized), Double Mini-Trampoline and Tumbling.