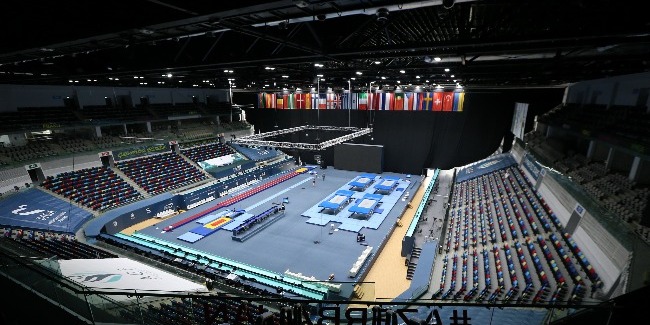 Baku will host the 35th edition of the Trampoline World Championships in 2021. The decision was made by the International Gymnastics Federation (FIG) Executive Committee at its meeting in Pacific Harbor, Fiji.

President of the European Union of Gymnastics (UEG) Farid Gayibov also took part at this meeting.

Over the last three years, Azerbaijan’s capital has already hosted two Trampoline World Cups, in 2016 and 2017. In this session, Baku hosted the European Championships in Trampoline, which became one of the most striking events in the sporting life. Now Baku is entrusted with the 2021 World Championships, which can become a new peak in terms of organizing large-scale competitions in the country.

The start in Baku will be the first significant competition after the Olympics for the gymnasts. Therefore, there will be both leaders of many years and new names.

Commenting on the decision of the FIG Executive Committee, FIG President Morinari Watanabe said: “We’re delighted that countries who had never previously hosted World Championships in these disciplines [trampoline and acrobatics] have applied to organize these big events. This will contribute to the development of these gymnastic sports in new regions.”

President of Azerbaijan Gymnastics Federation, Mehriban Aliyeva expressed confidence that organizing the World Championships in Trampoline Gymnastics, Tumbling and Double Mini-Trampoline in Azerbaijan in 2021 will contribute to the further development and popularization of this gymnastics discipline, as well as helping strengthen international relations in the field of sports, reads the press release on FIG’s website.

Thus, in the coming years Azerbaijan will host two world championships in gymnastics disciplines. The country will host the world forum among the rhythmic gymnasts in 2019 and the World Championships in Trampoline and Tumbling in 2021.