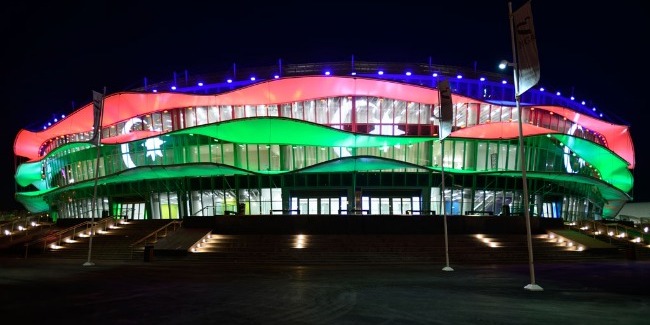 Milli Gimnastika Arenası (National Gymnastic Arena), which was inaugurated in 2014 and repeatedly witnessed international competitions, will open its doors in 2019 as well.

On May 23-25, 2019, Milli Gimnastika Arenası will receive the strongest aerobic gymnasts of the continent for the first time. Organization of the European Championships in our capital in this sport discipline, which has been started to be developed for the last 5 years in our country, will certainly have a positive impact on development of our national gymnasts.

31 May - 2 June will specifically be dedicated to rhythmic gymnasts. Thus, Baku would have already hosted the European Championships in the most favourite gymnastics discipline - Rhythmic Gymnastics for the fourth time.

It should be mentioned that Azerbaijan Gymnastics Federation, having a great experience in organization of international events, will host the World Cup series in Artistic Gymnastics, Trampoline Gymnastics and Tumbling as well as the World Cup and World Championships in Rhythmic Gymnastics during 2019.

It is worthy to note that as a result of special attention and focus shown to sports in our country, organization of large-scale international gymnastics competitions in Azerbaijan today, along with playing a significant role in development of sport disciplines, also contributes to the promotion of sport tourism.